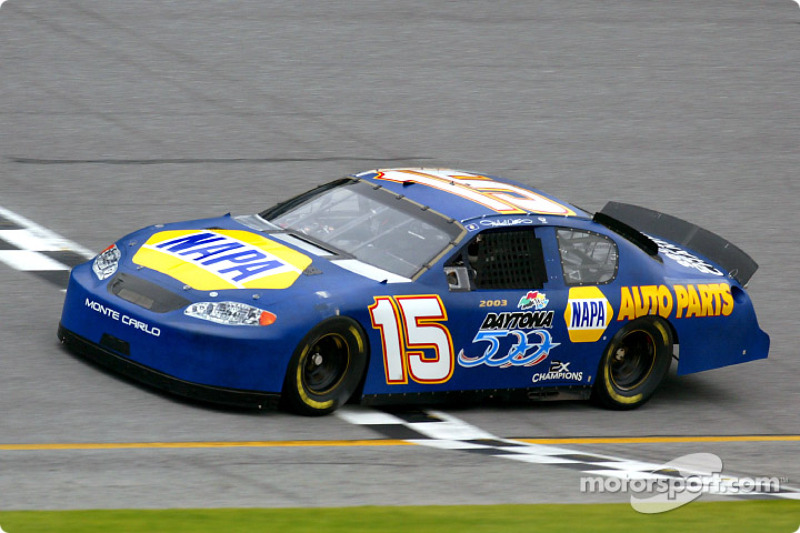 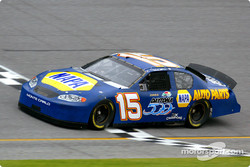 Michael Waltrip.
Photo by Daytona International Speedway.
Waltrip, the reigning and two-time Daytona 500 champion and driver of the No. 15 NAPA Chevrolet, was fastest during Tuesday's morning and afternoon sessions. He turned the top lap of 186.834 mph in the morning session and also claimed the third-fastest lap of 185.820 mph. In the afternoon, Waltrip's session-high lap was 185.755 mph.

"It's the pinnacle of our sport," said Waltrip of the Daytona 500. "It's quite an honor. I don't take it lightly."

Even a morning setback couldn't stop the No. 15 team. An oil line broke during one of Waltrip's runs, causing him to graze a wall. With that car suddenly unavailable, he switched to his second car and turned the fastest lap during the afternoon session.

"It happened so fast I didn't really know what went on," said Waltrip, who explained the problem and added, "We had a pretty major oil event under the hood that really messed that car up."

* On tap for Wednesday ... At noon, media covering Day Two of NASCAR Preseason Thunder will meet first with Kenseth, and then with Earnhardt Jr., last year's third-place finisher in the NASCAR Top 10. Visiting the Daytona International Speedway media center at 1 p.m. will be NASCAR NEXTEL Series team owner Richard Childress, who will discuss his recent trip overseas to visit U.S. troops in Iraq. Following Wednesday's afternoon test session, 2004 NASCAR NEXTEL Cup Series rookie of the year candidate Brendan Gaughan, driver of the No. 77 Kodak Dodge, and his crew chief, Shane Wilson, will meet with media from 5:15-5:45 p.m.

* Rested and ready ... The 2002 series champion, Tony Stewart (No. 20 Home Depot Chevrolet) was the media guest during Tuesday's lunch break. Among the topics: his early-season testing schedule, his World of Outlaws and USAC teams and his outlook on the 2004 season. Prior to this week's NASCAR Preseason Thunder session, Stewart participated in weekend testing for the Rolex 24 -- the season-opener for the Grand American Road Racing Association's Rolex Sports Car Series that will be held Jan. 31-Feb. 1. Stewart will team with Earnhardt Jr. and Andy Wallace to drive the No. 2 Crawford DP03 Daytona Prototype.

"It's nice to do something different every once in a while," Stewart said. "In all honesty, I really feel like it will help me be a better road racer when it comes time to go to the road course races with Cup this year. We learn so much from the guys who are professional road racers. You pick up little things here and there."

Stewart, who finished seventh in the NASCAR Top 10 in 2003, says his team hasn't experienced any turnover. He's also ready for another title run.

"We're all working hard to try to put ourselves in position to run for a championship title like we did two years ago," Stewart said. "It's hard to say what's going to happen because you don't know how everyone else's programs are going to be compared to the way they were last year. We're just going to do the best we can."

* Dale Jarrett (No. 88 UPS Ford), the 1999 series champion, visited with the media following Tuesday's test sessions. The three-time Daytona 500 champion, who was fourth-fastest in the afternoon at 184.740 mph, talked of the dedication needed to win the Daytona 500, and the significance of a victory.

"The effort to win this race, in the percentage of time, probably hasn't changed over the years," Jarrett said. "Nowhere else do we test for three days. This is what it's all about. Until you've been here, it's hard to imagine what it does for your career, for your confidence."

What: NASCAR Preseason Thunder.
Where: Daytona International Speedway.
When: Jan. 6-22.