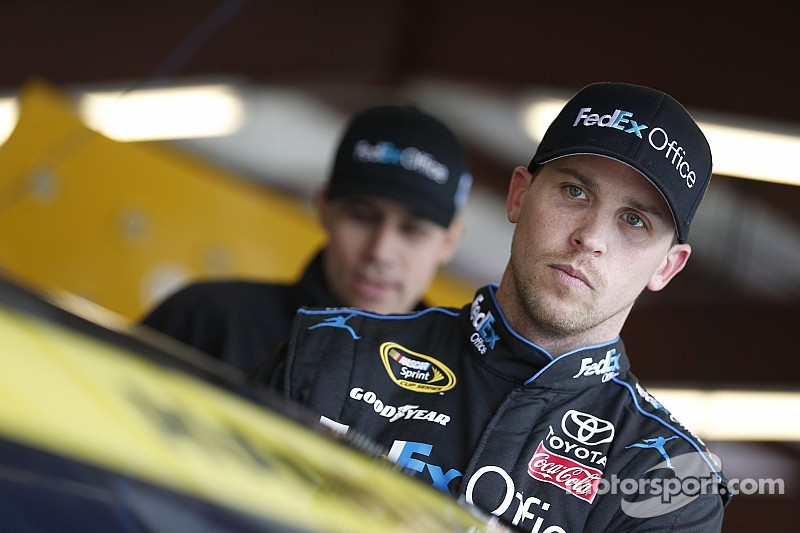 LOUDON, N.H – Joe Gibbs Racing’s Chase hopes went from bad to worse for two of its contenders in the Sylvania 300 on Sunday.

Denmy Hamlin led 32 laps early at New Hampshire, but was mired in traffic after he was forced to pit early (Lap 95) when the team was unable to fill the No. 11 Fed Ex Toyota with fuel on the first stop during the competition on Lap 35.

Hamlin dropped to 22nd, one lap off the pace. Knowing the situation, Darian Grubb told Hamlin to remain in the pit stall during the next pit stop where the team worked to repair the fuel intake.

Hamlin dropped to 41st for the Lap 111 restart – five laps off the pace. He had just taken a wave around to get one lap back on Lap 178,  when all hell broke loose in Turn 2 between David Ragan , Cole Whitt and Martin Truex Jr.  Hamlin could not stop in time and slammed into the pile up.

"Well, we got into a crash and that ultimately set us back the extended amoung of distance," Hamlin said. "Still, we were five laps down and were trying to get some back with wave-a-rounds, but our tone is pretty much set and I was up in the high line. Saw the wreck happen, hit the brakes and got into loose stuff and just couldn't stop the car at that point.

"It's disappointing because obviously on performance we were good enough to move on, but can't have any mistakes in this three race deal and unfortunately, we have a pretty bad one."

As the No. 11 team started working on Hamlin’s car in the garage, Kyle Busch spun on the back stretch after contact from Kasey Kahne on Lap 188 . Busch was seventh when Matt Kenseth became loose in front of him. As he checked up, Kahne hit him from behind.

Busch was able to continue on the lead lap. Hamlin was not so lucky. After receiving severe suspension damage, the team did extensive work to the car and Hamlin was finally able to return to action on Lap 220 in 39th-place, 38 laps off the pace.

The hits kept coming for JGR. Kenseth, who was involved in a couple of earlier incidents, went spinning on Lap 270 while running sixth. Afer repairs, Kenseth restarted 26th, one lap off the pace.

The right way: Joey Logano is legit at Loudon