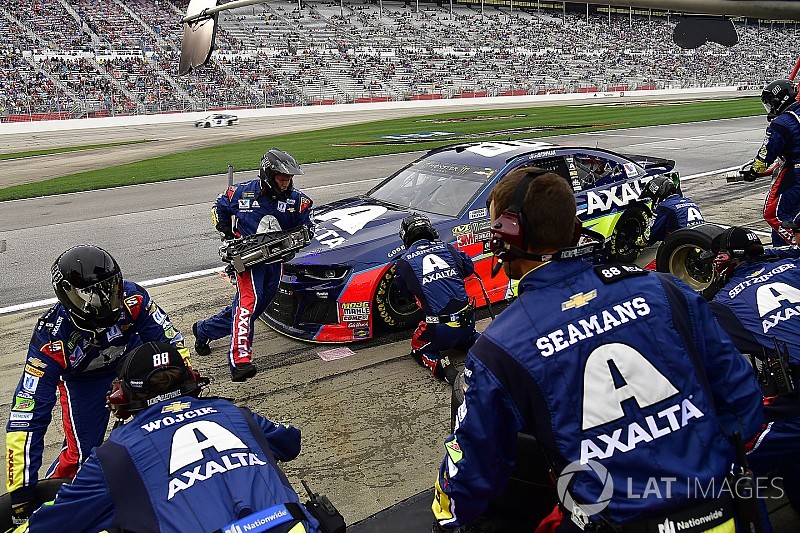 There were no glaring issues with NASCAR’s new pit guns or procedures in the season-opening Daytona 500 but Sunday was a different story.

At least three teams appeared to have issues with the spec pit guns during the race, including the teams of race-winning driver Kevin Harvick and fifth-place finisher Martin Truex Jr.

The problems may have become more apparent Sunday because Atlanta has a very abrasive track surface and teams easily would make between eight to 10 pit stops during the race.

Twice during pit stops in the race, Truex’s No. 78 team had problems with the air guns. The team was able to swap out the guns during the event.

“We fought hard all day, never gave up,” said Truex. “We had some issues that kind of sucked, but I guess we’ll have to work through it.”

Luckily for Harvick, his issue came at the conclusion of Stage 1, when he was forced to make a second pit stop to ensure his lug nuts were tight after the air hose came off one of the guns.

He started Stage 2 from the rear of the field but wasted no time blasting back through the field and into the lead.

Harvick’s crew chief, Rodney Childers, said he believes Paoli has done a good job considering the amount of guns they’ve had to produce in a relatively short period of time.

“There’s no way I could sit up here and complain about anything they’ve done because I can’t imagine taking that on during the winter, and what they did over a two-month span or a three-month span trying to get all that stuff ready for the teams,” Childers said.

“My opinion is we’re going to go through ups and downs and we need to go through them together and learn together, and (the issues) are part of it.”

Denny Hamlin, who finished fourth, said one of the reasons his Joe Gibbs Racing organization had invested a lot of time and money into pit gun development was to ensure reliability.

“They could control everything. That’s probably why – amongst the competition side of things – they don't want to fail because it's a bad luck thing,” Hamlin said. “They want it to fail because they did a bad job. It’s your own fault then.”

The change in pit guns was one NASCAR made in the offseason to help reduce costs. Reducing the over-the-wall pit crews from six to five members was another.