RAB Racing's Daytona 500 dream: Justin Marks prepares for 'the race of his life' in Duels 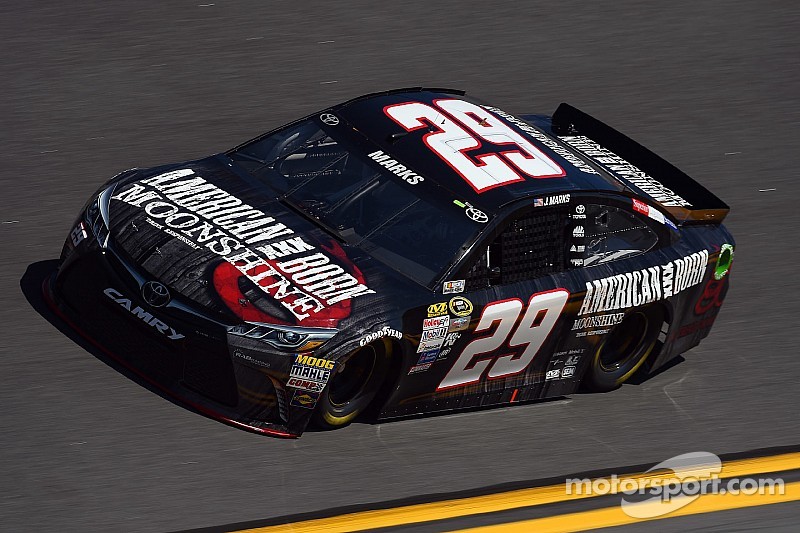 Motorsport.com spoke with RAB team owner Robby Benton and driver Justin Marks ahead of the Duels at Daytona tonight, who have reunited to take on NASCAR's biggest race.

Tonight, 49 cars will fight over 43 starting spots with six of them going home, leaving empty-handed. One of the teams fighting for their right to race in the Daytona 500 is RAB Racing, headed by Robby Benton. RAB has never made a Cup start, despite multiple attempts, including the 2012 Daytona 500.

If we could make this our first Cup start, it would kind of bring things full circle

"We were in a transfer spot comfortably," Robby Benton told Motorsport.com about that day. "But it was the first year of fuel injection. One of the censors read a fault code, turning the ECU back into what they call limp mode and we fell off the pace."

Back to try it again as Benton and Marks reunite

Three years later, the team is back and ready to launch another assault on the Daytona 500. This time around, it's going to be Justin Marks behind the wheel, a driver who has never took part in The Great American Race, but one Robby knows well.

The duo worked together in ARCA between 2006 and 2007 and have remained friends since, "We won some poles, set a track record, almost won a couple times," Benton recalled. "We planned to have him in the car again in 2008 but Germain gave him a deal where he could graduate to the Trucks. Justin and I are good friends and that was a good opportunity for him, so I was glad he got that chance."

I think it is risky hanging back ... Guys have hung back and gotten in the wreck or hung back and it never happened ... We have a good race car and I want to race

Since then, Marks won the Rolex 24 Hours at Daytona and seven years after their ARCA partnership, they've reunited to take on one of the biggest races in the world.

"If we could make this our first Cup start, it would kind of bring things full circle," said Benton. "It will be a very tough race to make with a lot of circumstances that could either hurt you or help you."

"For American Born Moonshine to come in and be a part of my deal for Daytona, that's why we're doing the triple trying to get as many cars on the track as possible," Marks told Motorsport.com "Robby's stuff is very good and he is very well prepared for the 500. He was in the 11th hour looking for a driver and my deal came together very late. Everything was already in place before I came along so it was a no-brainier with the quality of the equipment, the people, and I know Robby well. It was easy to just get right into the team because of that."

Going into pole day, you'd think the group qualifying format would help a team such as RAB Racing, but it did not work out that way in theend.

Usually, they treat rookie drivers like they have the plague (and) Justin is a rookie but at least half of the Cup drivers are good personal friends of his

"It hurt me, but it could have helped if I had better circumstances," explained Marks. "I think we would have been higher if it was single-car runs, but only by a few positions."

"It can either make your day or ruin your day ... You are really at the mercy of the cars around you," said Benton. "You can be a really bad car and get a nice draft, and suddenly you're on pole."

So now the No. 29 must race their way in tonight and unlike most rookies, Robby believes that Justin won't be avoided because of that yellow rookie stripe on the rear bumper.

"Usually, they treat rookie drivers like they have the plague."

"Justin is a rookie but at least half of the Cup drivers are good personal friends of his. He co-owns a sprint car team with Kyle Larson and he has the GoPro Motorplex. Jamie, Kasey, Jimmie, Jeff ... All these guys want to see him in the race and if they have a chance to help him where it's not going to hurt them, they will I think."

Avoiding the carnage and going towards the front

27 cars have been torn up during Speed Weeks thus far, but that American Born Moonshine Camry has not been one of them. Marks did have a scary moment during an early practice, but he is actually thankful that the it took place. "He (Gilliland) hit me from behind and I've never been in a Cup car, so I didn't realize how the bumpers matched up. It was a good experience for me and now I can anticipate how the car is going to react when it gets sideways like that."

As for his strategy going into tonight, expect to see Marks slicing and dicing his way towards the front.

"I think it is risky hanging back," he told Motorsport.com. "We came down here to race and I think if you race, you can control your destiny a little bit more. If you hold back, that's just not the way to make the Daytona 500 in my opinion. Guys have hung back and gotten in the wreck or hung back and it never happened."

"We have a good race car and I want to race."

Confident in the car

"I'm anxious but just really excited to get it started. I'm sitting around thinking of scenarios and how the race is going to go. We have our work cut out for us but I just want to get going. I have confidence in the car now after two really good practices yesterday. "

"The first couple practices, I would just ride, but yesterday, I tried to get behind some cars and draft and it felt like I could make some forward progress. I've never raced a Cup car here, but I guess we'll just have to see how it goes."

"It's one of the biggest races in the world of course. I've won a race on the road course here and then to make the 500, it would be two incredible things to have in my career."

We're going to try to run the whole season, but it all depends on how we come out of the box here at Daytona.

Marks is also attempting to pull off the triple this weekend, running Trucks, XFINITY, and Cup. "In the Truck, you can be really aggressive and make big moves, but the Cup car is a more methodical, more strategic form of driving is needed."

"It's not so hard (to run all three) because everything is pretty close together. The Cup car has taken priority of course and will continue to. It's going to be some busy days, but it's much better than not driving any car."

As for the plans for the future, the fate of the Cup program relies heavily on what happens this weekend and more specifically, tonight.

"We're going to try to run the whole season," Benton revealed to Motorsport.com. "But it all depends on how we come out of the box here at Daytona. If we can have some luck, our prayers are answered and we can make this race, do the same thing at Atlanta ... We'll be in a really good spot to be able to continue. Once you have a seat at the table, it's much easier with funding and everything. It's hard to sell a deal to a sponsor when you're on the outside looking in."

Shaking down the backups before The Duels