NASCAR Sprint Cup Series teams spend more than two months during the offseason preparing for the season-opening and most prestigious race, the Daytona 500 at Daytona (Fla.) International Speedway.

Despite all that preparation by the more than 43 Sprint Cup drivers entered, followed by 12-plus days spent in Daytona by those who go the distance, only one driver-and-team combination emerges victorious from the big race on the 2.5-mile superspeedway oval. It’s typically the driver and team that found the perfect blend of help from others on race day and a hefty dose of racing luck in the ultimate battle of restrictor-plate, big-pack competition. 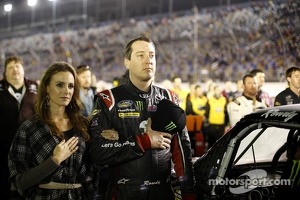 For Kyle Busch and the entire No. 18 Skittles Toyota team for Joe Gibbs Racing (JGR), there’s Daytona, and then there’s the rest of the season. After Sunday’s 56th Daytona 500, the grueling, 36-race marathon-like schedule heads out West to the second race of the 2014 season – Sunday’s The Profit on CNBC 500k at Phoenix International Raceway.

After a 15-year break, the “Rainbow” will be making its return to the Sprint Cup ranks as the colorful Skittles paint scheme will adorn Busch’s No. 18 Toyota on the Phoenix mile oval. The Skittles brand made its NASCAR debut in 1998 in partnership with MB2 Motorsports on the No. 36 Pontiac for driver Derrike Cope. In 1999, driver Ernie Irvan took the wheel of the Skittles No. 36 Pontiac and went on to take the top starting spot at Indianapolis Motor Speedway.

As they now head to Phoenix, Busch, crew chief Dave Rogers and the rest of the Skittles team are comforted in knowing their fate is much more in their own hands. Handling and driver skill have much more to do with a team’s success at Phoenix than Daytona. The tricky mile oval will be first real test of several offseason rule changes designed to change the handling characteristics of the cars and provide more passing and side-by-side racing.

So as the series heads out to the “Valley of the Sun”, Busch will hope the offseason changes, along with the debut of the “Rainbow” with JGR, will lead to a colorful celebration in victory lane Sunday afternoon at Phoenix.

KYLE BUSCH, Driver of the No. 18 Skittles Toyota Camry for Joe Gibbs Racing:

How do you feel about heading to Phoenix this week after an up-and-down Speedweeks?

“I’m glad to go back to a racetrack where drivers matter and car handling matters. I ran really well at Phoenix in both races two years ago, but we struggled there as an organization last fall. I think the guys at JGR have worked really hard to make sure we turn that around, so I’m looking forward to getting back there, for sure. The best way to get over the disappointment of the Daytona 500 is to get back in the car and have another chance at winning the next one. I wish the race was today, to be honest. I’m ready to have the Skittles colors on our car this weekend. I know it would mean a lot to get the rainbow into victory lane on Sunday.”

Will you see drivers getting in each other’s way with the new qualifying format?

“You may or you may not, but 30 minutes for everybody to be able to get out there and kind of get a clean lap, I think, is enough time. Realistically, you’re not going to make multiple runs in one session – I just don’t see that happening with the way tires are at most places. But Phoenix is one place you will see more than just one lap. Phoenix or Kansas or Michigan – places like that where the pavement is still new and laps on tires actually make you go faster. I think you’ll see it get crazy at those places.”

If you win one of the first five races, will it change how the others are approached with the new Chase rules in place?

“I don’t know that it would really change a whole lot for the rest of the year. I think it gives you an opportunity where it relieves a little bit of pressure because you can say, ‘OK, we’re locked in the Chase, so now we don’t have to try so hard and put ourselves in bad situations or whatever when it comes to trying to make the Chase.’ Like I said, there are more spots now than ever to make the Chase. There are going to be guys who make the Chase with no wins, although we hope we’re not one of those guys. It’s just going to play itself all the way down to Richmond on who’s in, who’s not and what all happens. The flip side of that is you can win a race early on in the season and the pressure comes off and you can go on and you can win six or seven because you’re just going out of the box. You’re trying crazy stuff and seeing if you can’t steal some wins, I should say, versus earning them, I guess.”

How much will the new ride-height rules impact teams?

“It’s affected us enough where we’ve been testing an awful lot this offseason, already, trying to figure things out and trying to come up with what’s going to be best. Is running the old way going to be best? Is running a new way or running something entirely different going to be good? What is it? That’s been the story of what we’ve been working on. We’ve been to Nashville twice. We have had a few other short-track tests, as well, and then I’m sure we’ll have another short-track test before Martinsville. Nashville is going to get a lot of business this year, I have a feeling.”

What does it take to be successful at Phoenix?

In addition to three Nationwide Series wins at Phoenix, you also won in your second Sprint Cup start at the mile oval. Do you enjoy racing at Phoenix?

“Phoenix is a pretty neat place, even though they made some changes with the repave. For some reason, I’ve always run well there. I don’t know if it’s that I’m comfortable being back close to home on the West Coast, or what. I always have a little more fan support out there, as well. As for the track itself, you have two distinctly different corners at Phoenix.”

Ambrose Proud to Carry The International Flag for NASCAR