Ragan is ready to race under Bristol lights

No superstitions for no.34 team with green paint and peanuts

STATESVILLE, N.C. (August 20, 2013) - The bright green and yellow colors of Peanut Patch will shine brightly under the lights of Bristol (Tenn.) Motor Speedway this weekend when David Ragan brings the South's Favorite Snack to the biggest night race of the year.

Peanut Patch returns to the No. 34 team for its third race of the season, Saturday night's Irwin Tools Night Race, one of the hottest tickets of the NASCAR Sprint Cup Series season. The weekend will also include a stop at Food City Race Night, where Ragan will sign autographs on Thursday from 5 to 7 p.m. during the annual race festival in Bristol.

Ragan is familiar with Victory Lane at Bristol. He won at the track in the Nationwide Series in 2009. On the Sprint Cup level, the 27-year-old driver has one top-10 and two top-15 finishes at the half-mile oval. 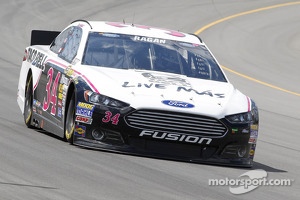 "We have had a pretty good track record at Bristol over the years. David Gilliland gets around that track pretty good, so we can lean on those guys some. And it's one of the racetracks where mechanical grip is really important, and you're not going fast enough for your aero package to be everything. So you have an opportunity to have fast cars and we can certainly have a strong run there. Five hundred laps is a very long race at that place and you have to have a good night on pit road and avoid all the wrecks. If we have a good-handling car, that can be a race weekend that we have a big day for us.

"To have Peanut Patch back on the car at Bristol is a lot of fun. We'll be down at Food City Race Night on Thursday night with them. There's always a big crowd and it's always one of the bigger events of any NASCAR race weekend. Having Peanut Patch on our car for the night race with the nice bright colors will be cool to see. It'll definitely look good under the lights."