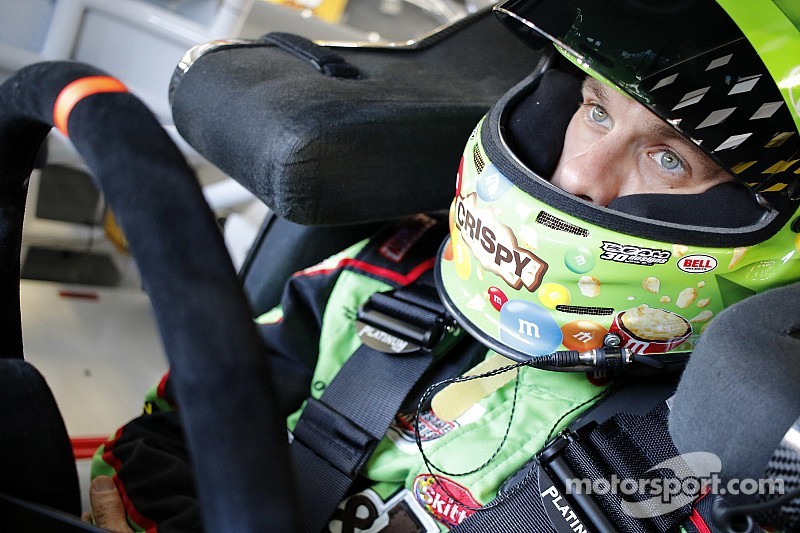 Before the STP 500 at Martinsville Speedway, David Ragan described his love for short tracks to team owner Joe Gibbs.

Following Ragan’s fifth-place finish on Sunday – and his second consecutive top 10 finish on the half-mile paper clip – it’s understandable why the current driver of the No. 18 Toyota made that claim.

Ragan, who started 20th, patiently worked his way through the field for his first top-five result since his win at Talladega Superspeedway two years ago.

“That’s a testament to what kind of team we have,” Ragan said. “We really started the weekend off on a bad note Friday. We struggled. I really enjoy Martinsville, these guys are really good here and we had high expectations.

“I really didn’t know Friday and Saturday if we were going to meet those expectations or not but everybody on the M&Ms Crispy’s Toyota team did a nice job. We had great pit stops. We had a few bad restarts to overcome early in the race but all-in-all we had a solid car. I don’t know if we had a winning car, but we had a top-five car and it was good to finish there.”

Joe Gibbs Racing had its most dominant run to date this season with Denny Hamlin leading the charge for the win and Matt Kenseth (fourth) and Ragan rounding out the top five. Carl Edwards maintained pace with his teammates until cutting a right rear tire with 68 circuits remaining in the race.

For Ragan, it was his first solid run with the No. 18 squad since filling in for Kyle Busch, who sustained injuries to his right leg and left foot in the Daytona XFINIITY Series race. Prior to Sunday, Ragan’s average finish with the team was 19.75.

We've had some good speed and we've had top-10 cars, but we just haven't been able to have a good, entire weekend.

"I feel like we've under-performed the last three or four weeks,” Ragan said. “A lot of it has been just mistakes on my behalf, mistakes on the team's behalf and we've been really good. We've had some good speed and we've had top-10 cars, but we just haven't been able to have a good, entire weekend."

Certainly, it’s difficult for a driver to climb into another racer’s seat under any circumstances. But for Ragan, who has been trying to reestablish his career since losing his ride with Roush Fenway Racing at the end of 2011, the pressure is on.

And while Busch is on the mend, Ragan has the opportunity to prove he deserves a second chance. It’s just a question of what he does with his time in one of the most competitive cars in the garage.

"You have to qualify well, you have to communicate well on Saturdays and you have to have mistake-free races on Sunday. We just haven't put together a full, entire weekend and I think that just shows that we've had the speed and we're capable of doing it, we just have to get the job done.”

Making the most of the situation

Coach Gibbs was encouraged with Ragan’s results on Sunday. Although Gibbs did not say when the he expects Busch to return, until then, he hopes for the best for Ragan now and in the future.

“We're hoping for the same thing for him for his career and everything,” Gibbs said. “I think we've had a couple of tough breaks for him this year that kind of kept us back there around 20th, but you know, I was sure happy to see him and for M&M's and everything going on.

“Kyle came to our meeting on Tuesday, and he looked good.  He's standing up on his right foot now and kind of showing some of that energy and stuff that he's got going.  He drives a mean wheelchair.

“We're excited about him coming back, but I think it's good for David, and we're really pulling for him, too.  We want him to do well.  Hopefully, we have some good runs here still left for him.”