DRY THIS TIME BY

That’s the distance that separated Kasey Kahne’s No. 4 Red Bull Toyota from a shot at victory in NASCAR’s longest race Sunday at Charlotte Motor Speedway. He had already gone 600 miles, but …

“I ran out of gas,” Kahne said. “We were trying to make it. It was just our strategy. That was our plan.” Had Jimmie Johnson’s engine not blown, spraying oil on the track, on lap 396 to bring out the race’s 14th caution flag, the plan most likely would’ve worked. But the race went into a two-lap overtime, and all that was left in Kahne’s tank was a gargle of fuel. He was on point for laps 399 and 400 and led the field to the green flag for the final restart, but just as he began to go the gargle was gone. 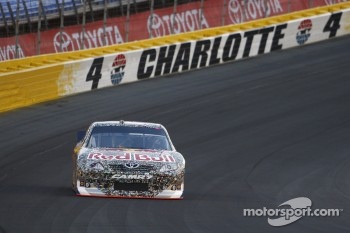 As the field roared past in turn one, Kahne was creeping along helplessly on the outside. He finished a lap down in 22nd.

“It’s what we had to do,” Kahne said of stretching fuel mileage from a pit stop more than 50 laps earlier. “Our Red Bull Toyota was pretty decent out front in the top six, with pretty clean air. It was our strategy. We stuck with it. We had to. It was our only chance.”

Meanwhile, teammate Brian Vickers kept digging while fighting balance issues for much of the first half of the race as the No. 83 team scrapped to make up two laps. He earned the free pass under caution at lap 288 to return to the lead lap, and from there the team used the “stay out” strategy to gain track position.

By staying out twice — and narrowly avoided a three-car wreck on lap 302 — Vickers climbed to as high as fifth. But the No. 83 Red Bull Toyota couldn’t quite hang with the front-runners and faded in traffic. At the tail end and with nothing to lose, Vickers pitted under the final yellow, restarted 17th and finished where he started four and half hours earlier — in 18th.