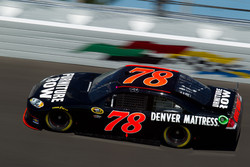 Smith, who started the 500-lap race from the third position, struggled with maneuverability through the high-banked corners at the half-mile oval. But as he has done so many times, the 27-year-old driver managed to get the most out of his No. 78 Furniture Row Chevrolet.

"We just never seemed to find the right balance, which is critical at Bristol," said Smith. "At times we were good, but the car was a handful for the majority of the race. Considering what we went through the last two races with an accident and engine failure, finishing the race was something we really needed to accomplish."

Smith and the Denver, Colo-based team were hoping to finish off the Bristol weekend with the same success they had in Friday's practice and time trials when Smith was one of the leading drivers by posting a career-best qualifying effort of third.

"We had some positives this weekend which we want to build on," noted Smith. "The short track program (less than a mile in length) has not been the best for us, but we are getting better. Next week in Southern California is a two-mile track and we sure like that type of venue."

Smith picked up one spot in the driver point standings and is 27th after four of 36 races.

The Bristol race winner was Kyle Busch. Rounding out the top-five in order were: Carl Edwards, Jimmie Johnson, Matt Kenseth and Paul Menard.