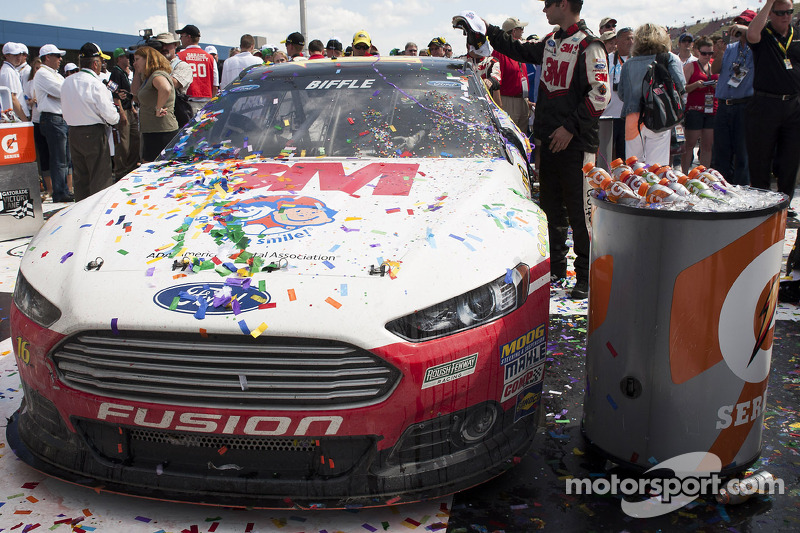 Ford drivers started the weekend off fast, with Roush Fenway Racing driver Carl Edwards putting down an impressive lap during qualifying with a speed of 202.452 mph to start on the pole for Sunday’s race. 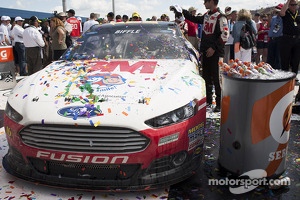 Edwards led 16 laps, but in the end it was Biffle who held off Kevin Harvick and Jimmie Johnson to claim his 19th career victory and give Ford Motor Company a second consecutive win at their home track.

“It’s really exciting to see all the racing heritage and to be able to be a part of the 1,000th win,” said Biffle.

“I think I contributed to over 50 of those, which is a small number compared to 1,000, but I’m still excited. I was worried about the 48 [Jimmie Johnson] towards the end, but when I got in clean air, it was over.”

“I have been with Ford Motor Company and they have been supporting me for almost 50 years now,” said Jack Roush, owner of the No. 16 3M Ford Fusion. “We expect to be our best when we come to MIS and I am glad we could pull it off and give Ford their 1,000th win.

I was no less proud to have helped Ford win its 1000th race in NASCAR as I was to win the race here at the 100th anniversary of Ford Motor Company. Both are great milestones that I’ve been honored to be a part of.”

Biffle’s win on Sunday came on the exact 110th birthday of Ford Motor Company. Jamie Allison, Director of Ford Racing, couldn’t think of a better birthday present than to celebrate in Victory Lane.

“First I want to congratulate the winner Greg Biffle and his team. What a great moment that is. Thanks to all the Ford teams and Roush Fenway, Penske, the Wood Brothers, Germain Racing, Front Row Motorsports, and Richard Petty Motorsports and all those that have accumulated these wins throughout the years,” said Allison.

“We couldn’t be prouder to have this moment come here today at Michigan in front of so many of our Ford friends. What a great race and a great day for Ford.”

Biffle’s win comes with only 11 races left until the Chase for the NASCAR Sprint Cup Championship. Three Fords remain in the top 10 in points with Carl Edwards second, Greg Biffle eighth, and Brad Keselowski in ninth.

Johnson, driver of the Stenhouse Jr. Motorsports No. 41, started on the front row and was able to get past pole sitter Ryan Hall within a couple of laps to take the win on Friday night.

“My guys have been working their tails off these past few weeks. We’ve kind of been off. We haven’t won a race in a month, and for us that’s a long time,” said Johnson. “They built a brand new car and Chris Moss with Roush Yates has been working on our engines trying to get them faster.”

Rick Eckert captured his third straight victory in Paul Crowl’s No. 7 with his Roush Yates Ford Dirt Late Model engine at Winchester Speedway on Saturday. Eckert won the 35-lap Paul Johnson Memorial, his second win of the season in Winchester and fourth win in seven starts.

“This place was real racy tonight. I was able to move around a bit and the car was working really well up top,” said Eckert. “I have to thank Paul for giving me the opportunity to drive his car and I’m glad to be able to get another win for him here tonight.”

Ragan to drive No. 34 hauler cross-country to Sonoma

Gordon going back to Sonoma in search of sixth victory