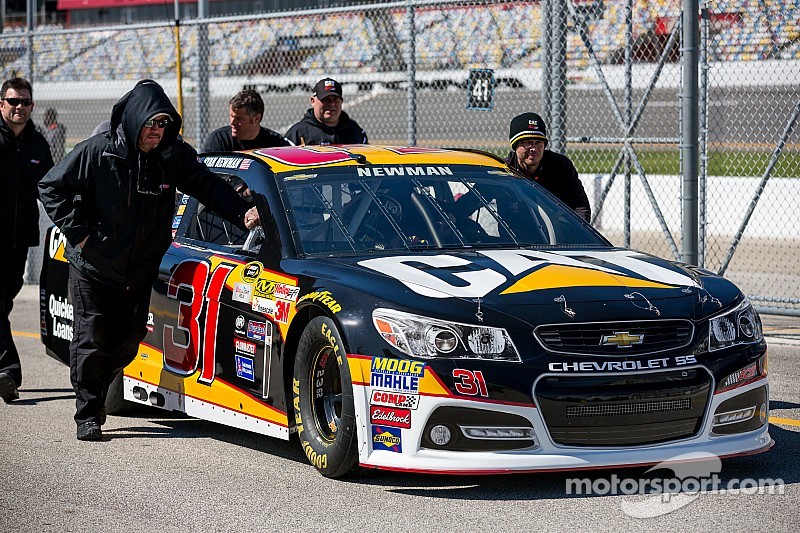 On Thursday, the National Motorsports Appeals Panel heard RCR’s appeal of the P5 penalty assessed to the No. 31 Caterpillar team for tampering with tires at Auto Club Speedway.

The loophole covered the jargon of the secondary penalty that addressed “infractions detected during post-race inspection (12.5.3.5.3)” to which NASCAR levied an additional 25 Championship driver and owner points and an additional $50,000.

The panel agreed: “There is no written explanation of what constitutes a post-race inspection”. However, it upheld the base penalty, which included a $75,000 fine, loss of 50 championship owner and driver points and the six-race suspension of key personnel including crew chief Luke Lambert, team engineer Philip Surgen and tire specialist James Bender were all suspended for six races and placed on probation for the end of the year.

Before the hearing, RCR prepared for the worst. Instead of sending Lambert with driver Ryan Newman to this week’s tire test at Kentucky Speedway, Todd Parrott attended the exercise to being building a rapport with the driver.

Although RCR has not announced whether or not it will appeal the panel’s decision, late Thursday, the team announced that Lambert, Surgen and Bender will start serving their suspensions and Parrott would be on the No. 31 pit box this weekend at Bristol Motor Speedway.

“Obviously, they trusted me,” Parrott told Motorsport.com. “They had a test plan worked out with Ryan. I was able to go and learn his lingo in case something like this happened.

“The test went really well. I have a good understanding of how Ryan communicates with the team.”

Parrott is no stranger to the Sprint Cup ranks. The second-generation crew won the 1999 Cup championship with Dale Jarrett and has 31 career wins in that series.

However, in October 2013, Parrott was indefinitely suspended from NASCAR after failing the substance abuse policy and was released Richard Petty Motorsports. Upon completing NASCAR’s reinstatement process, Parrott joined Tommy Baldwin Racing in February 2014 and continued as a crew chief.

Last December, RCR hired Parrott, 51, to organize and oversee its XFINITY Series program. For Parrott, it was an opportunity to return to an organization that was capable of winning races and championships. He found that with RCR.

“I’ve really enjoyed my time at RCR and working with the XFINITY teams,” Parrott said. “I love new role. I love working with the RCR guys. I’ve known a lot of these people for a long time.”

With Parrott at the tire test, Lambert stayed back at the Welcome, N.C. campus and prepared for this weekend. Parrott will rely on the No. 31 notes and other team engineers to get up to speed on the half-mile track where Newman finished 16th in the spring race and 13th last August.

It’s kind of a weird situation because Luke and Ryan have such a great relationship.

“When I do hang out on the Cup side, it’s usually in the No. 31 truck,” Parrott said. “It’s kind of a weird situation because Luke and Ryan have such a great relationship. They get along great. But I really like working with Justin (Alexander, Paul Menard’s crew chief) and Gil (Martin, No. 3 crew chief).

“Yes, it’s a great opportunity. I just wish it was under different circumstances. I feel sorry for Luke and the guys.”

Sorenson to pilot FRM No. 34 at Richmond