Ricky Stenhouse Jr. at Bristol: Every man for himself

Team owner Jack Roush said he would be "disappointed" if Stenhouse thought any other way...

Ricky Stenhouse Jr. said he would have considered turning Roush Fenway Racing teammate Carl Edwards out of his way if he could have gotten that close on the final lap. 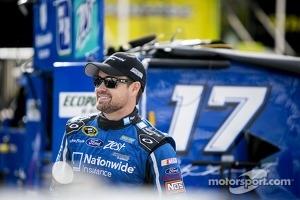 "I was thinking I would use the bumper if the opportunity was there," said Stenhouse, whose second-place finish was the best of his career in Sprint Cup. "If you get the win, you're in the Chase and you can let the rest take care of itself later."

Team owner Jack Roush said he would be "disappointed" if Stenhouse thought any other way.

"When it comes to really charge for the checkered flag, there are no team orders," Roush said. "There are no rules. I expect them to race one another as they expect to be raced. I expect Ricky, as a fierce a competitor as there is out there, (to) bump and run and take the prize if he could."

Edwards said he wouldn't have been surprised, given the importance of posting a win to qualify for the Chase.

"I know what Ricky was thinking and it was going to be a battle," Edwards said. "The way I envisioned it, probably neither one of us would make it back to the start-finish line. Ricky was being aggressive all night. I was fully prepared for smashing into each other, bouncing off the walls. That's where we're at right now. You've got to go for the win."

Bristol is just what the doctor ordered for Stewart