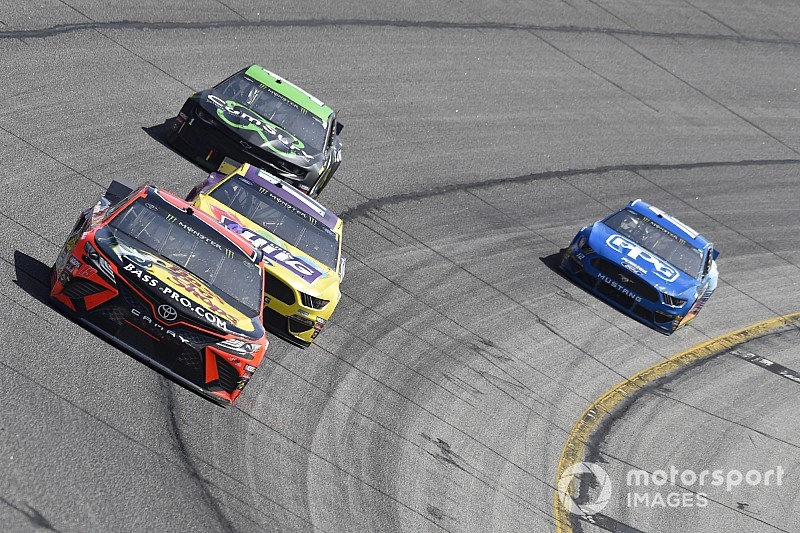 Ricky Stenhouse Jr. took a lot of heat for the way he raced Martin Truex Jr. at the end of Sunday’s race at Atlanta but he doesn’t believe he did anything wrong.

Truex, who was trying to chase down leader Brad Keselowski at the end of the race, said he was held up by Stenhouse, who continued to run the bottom lane in front of him and was a lap down.

“It was just lapped cars. It was a shame we got put in that position on that last restart but that’s the way the caution fell,” Truex said after the race. “Just (Ricky Stenhouse Jr.) rode there in front of us forever and ever running the bottom (lane), and I kept telling him I needed the bottom.”

With the way the final restart played out, Stenhouse had his own opportunity. Although a lap down, he ended up behind Keselowski (wave-around cars line up in the back), which gave Stenhouse a chance to race Keselowski to get back on the lead lap.

“To me I didn’t feel like we really held him off. If he was that fast, then he could have closed up to us,” Stenhouse told SiriusXM NASCAR Radio host Claire B Lang on Wednesday night. “If leaders get within five car lengths of me, I let them go. Mike Herman Jr., my spotter, was updating me how far back (Truex) was. We were racing to try to get back on the lead lap.

“I felt like there at a moment we were going to be able to catch (Keselowski). We were running faster lap times than he was. So, we were thinking, ‘Hey, let’s just old school get our lap back (by passing the leader) and see how it falls.’ ”

On the restart, Keselowski and Truex both found themselves behind lapped cars (including Stenhouse). Keselowski made his way past them without any problem.

“Brad Keselowski, he restarted behind me, actually nose to tail with Truex and he passed us on the outside. Generally, when I have a faster car, I just drive around the lapped cars that I’m lapping.

“It’s one of those things that I felt like me and my spotter and our team did the right thing for what we had going on.”