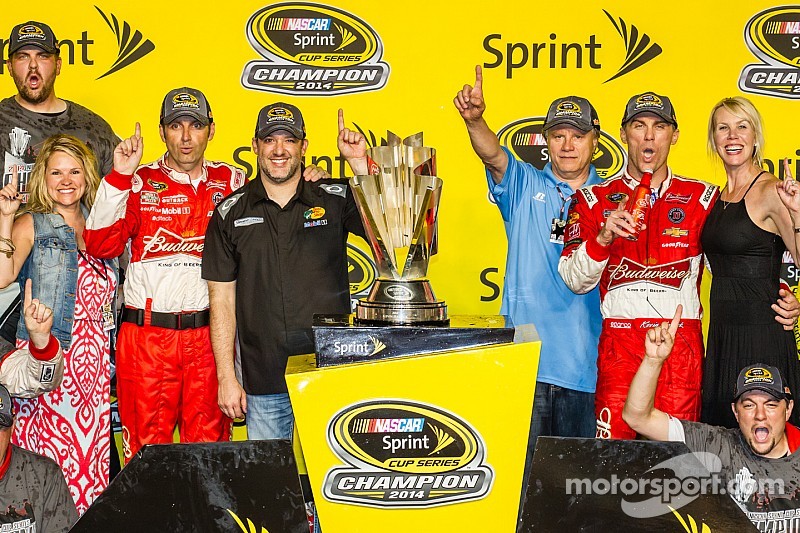 MIAMI – Rodney Childers was fairly content at Michael Waltrip Racing before he got the call.

Unlike his driver Kevin Harvick, Childers could have easily stayed the course as Brian VIckers crew chief. After five seasons at MWR, there was security.

But for a crew chief, playing it safe seldom wins the race. So Childers gambled - and won. After making his move to Stewart-Haas Racing one year ago, Childers earned his first Sprint Cup Championship on Sunday.

Unlike Childers, Harvick’s departure from Richard Childress Racing wasn’t as much a leap of faith as it was a need to begin again.

After 13 seasons in the Sprint Cup Series, he was admittedly miserable. Initially, Harvick fought the comparisons to the late Dale Earnhardt. Inevitably, the demanding driver – and there’s not anything wrong with that – was simply spinning his wheels.

Harvick, now 38, grew up at RCR. He had advanced as far as he could with the company. And more importantly, it just wasn’t fun anymore.

His buddy, Tony Stewart, offered Harvick an opportunity at Stewart-Haas Racing where he could win championships now. Stewart proved that in 2011 after taking home his third Sprint Cup and the first for SHR in just its third season.

With co-owner Gene Haas’ resources and the Hendrick Motorsports alliance Harvick would never have to “wait until next year” again.

Putting the pieces together

For Childers, however, it was more a question of leaving his comfort zone. Long before the walls of MWR came crashing down last fall following “Spingate” at Richmond International Raceway, Stewart and Harvick were courting the veteran crew chief. Childers, a former Late Model racer turned crew chief, made the transition into the Sprint Cup Series by 2005.

Childers paid his dues with MB2 and Gillett Evernham Motorsports before joining MWR for its third full season with David Reutimann in 2009. In their first year together, Childers led Reutimann to his first Cup win – and the first for MWR. Although the pair never recaptured the magic of that first season, the No. 00 team won again in 2010. It was clear Childers had the touch.

As Reutimann was phased out, Childers’ star rose. He balanced the combined effort of Mark Martin and  Vickers in 2012 and 2013. In 2012, Martin’s cars enjoyed a 9.1 average start. The second season, Childers called Vickers’ New Hamphire victory in July. MWR has not won since.

Childers, who had been a crew chief for Vickers during his early racing days, made it official he was leaving one month later.

I wasn't even going to take the job until Tony got in his airplane and flew to Concord to meet me one night.

“I wasn't even going to take the job until Tony got in his airplane and flew to Concord to meet me one night, and then he got back on his plane and went back to Indiana,” Childers said. “And on my drive home, I said, if anybody is willing to, number one, do that for me and spend that kind of money for me, they're going to look after me.  He looked me in the eyes that night and said, we're going to do this.”

Childers’ good friend Kenny Francis, who he worked with during the Evernham days, was also instrumental in his decision. Not only could he detail the resources of the Hendrick Motorsports-SHR connection. Once Childers was released from MWR, the strategizing began. While other teams were gutting it out in the Chase, Childers was already assembling the part, pieces and personnel for the No. 4 SHR team’s Speedweeks debut.

“I had plenty of time to sit at home and think about a lot of different things, about how this was all going to play out with this new rules package and stuff,” Childers said. “The person that really influenced me the most was Kenny Francis…for me to come from a different organization, he basically gave me everything he had and said, these are the chassis we run, these are the spindles we run, this is the geometry we run, these are the four shocks we run, so on and so forth.

“So a lot of the credit has to go to Kenny, and then you've just got to take all that stuff and build it into the new rules package, and that part was fun for me.  Everybody was out racing those last few races and I was sitting there with my computer burning up with smoke coming out of it working on all this new stuff. It was definitely an advantage for sure.”

Childers acknowledge he “was nervous the first time” he sat down with Harvick but the two quickly clicked. Among racers it’s easy to find common ground – particularly, the desire to win. Although Harvick has a tendency to be wound tight and tough on his crew, Childers never experienced that side of his driver.

I knew him as one of the best drivers in the garage that wanted to win every week and was emotional at times and this and that.

“We had always raced against each other, and I knew him as one of the best drivers in the garage that wanted to win every week and was emotional at times and this and that,” Childers said. “You know, Kevin calls it that we dated for a year, but we really did.  I mean, like after six months of talking like every other day and text messaging every day.

“Going into that first test in December, there's never been any of that.  It's just been believing in each other and believing in our team.  Everybody picks on me at the shop.  They say I had two résumé piles, and I left for the weekend and somebody switched on me and I got the wrong résumé pile.

"But all in all, those guys have done a hell of a job all year. Our car chief (Bob “Cheddar” Smith) had never been a car chief before, and to have a car like we've done all year and have equipment as nice as we've had, like, those guys have just worked their guts out.”

Harvick admits that while he and Childers are “a little bit opposite”, together, the driver and crew chief balance each other. Despite the change in the pit crew prior to the Chase, nothing has changed in the core group.

He's put people around him that believe in what he does, and in turn, it's become everybody believes in what we do.

“I'm pretty high strung, he's pretty low key,” Harvick said. “He's put people around him that believe in what he does, and in turn, it's become everybody believes in what we do.  And when you can keep inserting "we," you can do a lot more things.

“That's the biggest thing that I've learned throughout the years in owning the race teams.  You can buy all the fancy stuff and you can do all the great things, but if you don't have the right people, you're dead in the water. He's come in and been committed to the program, and his wife has been a supporter, my wife has been a supporter, and all the guys on this team's wives have been supporters for the time it has taken to build this team and the dedication to things that it takes to be successful.”

Fast out of the box

Stewart realized the chemistry between Childers, Harvick and the No. 4 team from the onset. During the team’s first test at Charlotte in December, the team owner received phone calls detailing the tremendous speed Harvick had with the new cars and rules package. The trend continued and the team spent more time together.

“I remember having two tests during the off‑season, and those guys were just unbelievably fast at both of those tests,” Stewart said.  I thought, this is going to be a great start to the year. But the thing that was remarkable for these guys is the fact that they had speed every week, everywhere we've been, and that's something that's extremely hard to do in this series with so many different disciplines.  Their stat of leading over 1,000 laps in the Chase, that's something that's no easy feat in itself.

“For our organization and for Gene and for Chevrolet and all of our partners, it really is a team effort, and this is a team sport.  It takes everybody, everybody that's at Stewart‑Haas, whether they're in the fab shop or finish fab or assembly or the machine shop.  They are so important and so vital in making all this so smooth every week and having great partners like Hendrick Motorsports and the engine department and chassis shop.  It takes every one of those details to get here.”

Certainly, the resources the No, 4 team has to draw from are the best in NASCAR. But inevitably, it the human capital that differentiates the winners from the losers. Harvick and Stewart both credited Childers’ four-tire call on the final pit stop with providing the No. 4 Budweiser Chevy with an advantage in the closing laps. With all four champion contenders running together for most of the race, Childers needed a gamechanger.

“If you want to know how hard it is to win a championship here, it boiled down to the calls, the last pit stop and the strategies that were played,” Stewart said. “And one took zero tires, one took two, we took four, and one had a problem in the pits.  I think up to that point it was pretty evident the flow of the race up to that point, but I think that was the moment in the race where nobody really knew exactly how those strategies were going to play out.

“All three of the crew chiefs made calls that they thought were appropriate for how their cars were running and track position, and I'm proud of Rodney.  It takes guts to sit up there and see a guy stay out and then have to sit there and make that call.  It was a gutsy call by Rodney to stick to his guns and do what they had been doing.”

Winning crew chiefs must possess the chutzpah to take calculated risks. Certainly, both Childers and Harvick did precisely that when they left their former racing homes and moved to SHR. On Sunday night, the reward for that risk was the 2014 Sprint Cup Championship.

It's been a lot of fun.  He's become one of my really good friends, and there's not a day that goes by that there's not a text or a phone call or email or something that doesn't go by that we talk.  We talk about ‑‑ if there's anything going on, he'll give me a heads up, and I'm sure that I've told him from the beginning that there's some things I just don't need to know, so I'm sure there's a few things I don't need to know.  But in the end, I feel like we're pretty straight up and honest with each other, and that makes it a lot of fun, and I think that that bleeds over into the team and the guys.

“And they see the relationship that we have, and nobody ever really ever has pointed a finger and been mad at each other.  It's just we may get frustrated, and you just walk away, and next thing you know you're working on a solution. It's been an unbelievable first year, and pretty awesome.”

10 thoughts on the end of a long NASCAR season...