MOORESVILLE, N.C. (April 9, 2003) --- Robert Yates Racing announced changes to the management structure of the #88 UPS team. Effective immediately, Brad Parrott has been released from crew chief duties on the #88 team. 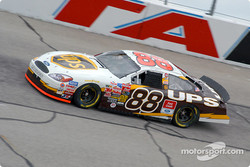 General Manager Doug Yates hopes the change will give the team the opportunity to take a step back, regroup and get the race program on target for the remainder of 2003.

The 2003 season got off to a strong start for Dale Jarrett and the #88 Robert Yates Racing team with a 10th-place finish at Daytona, and a win at Rockingham.

Jarrett was second in the points following the win at Rockingham in February, but currently sits 12th. Daytona and Rockingham are the #88 team's only top-10 finishes in 2003.

The #88 team will be under the temporary leadership of Garth Finley and Richard Buck this weekend at Martinsville.

Yates believes this change in personnel is necessary to get the #88 team back to championship form.

"We are in the business of winning races and championships," Doug Yates said. "For the last several races, this team hasn't performed to the level that we know it is capable of performing. We said at the beginning of 2003 we would do whatever it took to get the #88 team and Dale Jarrett back to championship contending form.

"This wasn't an easy decision but it was a necessary one, and we hopefully will be able to get the #88 team back to victory lane and back to where they are the team everyone looks to beat."