David Reutimann, driver of the No. 35 MDS Transport Ford, comments on racing at Martinsville Speedway: 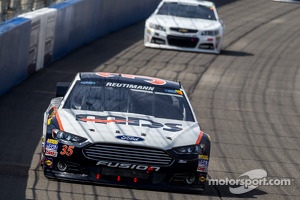 "Martinsville is a tough racetrack even when you've been with a team for a long time. So us coming in as a new team is a bit of an adjustment. But it's a good group of guys and a good organization, and I think we can all adjust and do what we need to do. Martinsville is one of those places where you have to be in survival mode. You need to take it easy on the brakes and keep the front bumper on the thing. You have to have a good car and keep it clean. But at the same time, when it comes time to race hard, you have to have something left to be able to do that.

"I'm a little rough on the brakes. It's one of those situations where it's good to have your spotter consistently remind you to just roll in the corner and be easy with it. I think Martinsville is as much of a rhythm track as anything else we go to. Once you get going on those long greens, just keep repeating things as long as you stay easy on the brakes."

Kyle Larson is the real deal