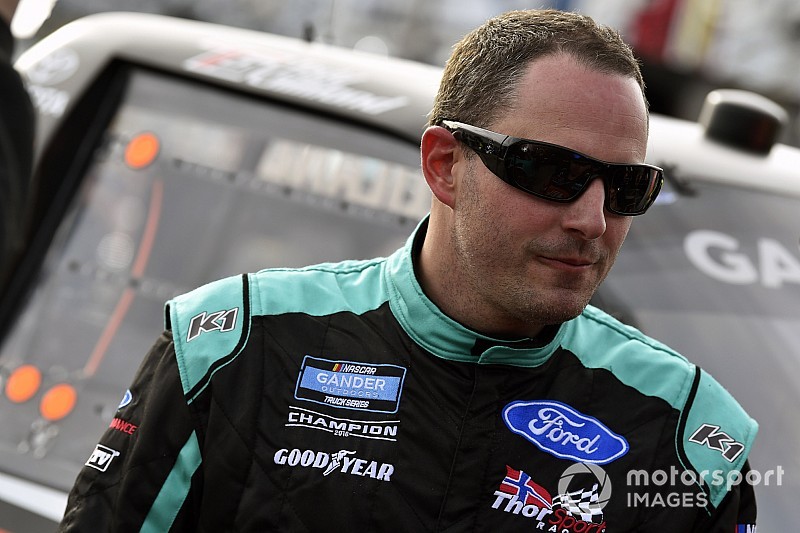 The NASCAR team discusses penalties handed out by NASCAR this weekend to Johnny Sauter and Ross Chastain, as well as who the favorites are to win in Sonoma.

Do you think Johnny Sauter's punishment of a one-race suspension by NASCAR fits the offense from Sunday at Iowa Speedway?

Jim Utter: I think it was an appropriate punishment. NASCAR has never tolerated retaliation while the race is under caution - for safety concerns above all else I would suspect. It's one thing to beat and bang with an opponent racing for position. It's quite another to take your wrecked race truck, run down someone under caution and then wreck them. Sauter is lucky he didn't lose more than one race.

Nick DeGroot: Let me preface this by saying that I get Sauter's frustrations. Both at Texas and Iowa his race ended after contact with Austin Hill, but wrecking someone under caution is big no. The one-race suspension is deserved and it doesn't change his eligibility for the playoffs, so it's more a timeout than anything else.

Tim Southers: I think the punishment was appropriate and in line with previous incidents where a driver uses their vehicle for retaliation under caution. I’m a little surprised they didn’t make the penalty a little more severe. I’m willing to bet if he would have collected any more trucks in his incident on the track with Austin Hill there might have been a bigger hammer dropped on the veteran.

Ross Chastain had his win taken away after his truck failed post-race inspection at Iowa Speedway. Do you think this will keep him from qualifying for the playoffs?

Jim: Getting into the Top 20 in points in Trucks wasn't going to be terribly difficult for Chastain to begin with but earning the victory needed to get in was going to be the most difficult. I still think Chastain can get in the Top 20 in points, but you never know when the opportunity for a win will present itself. So far, though, Chastain has managed to overcome every obstacle put in his racing path of late.

Nick: Excluding the disqualification, Ross has finished inside the top-ten in every single race this year. They are fully capable of winning again and probably will. Cracking the Top 20 in points will be the easy part, but overcoming this major setback and winning again will be the true test of this team. And if you want to know what I think, I believe they'll get it done.

Tim: I tend to agree with Jim that Chastain is talented enough and his team has good enough equipment to make it into the top 20 in the truck standings that is struggling to field trucks for the entire season back to 20th-place. I think his best shot for a win could actually come this weekend in St. Louis.

Jim: I think they will definitely be in the mix but I also expect Brad Keselowski and Kevin Harvick to be among the drivers in contention for the victory. The big question mark will be how the addition of "The Carousel" will change race strategy and whether it will favor some drivers over others.

Nick: Absolutely, but don't discount Kevin Harvick. He was right with Truex last year and won the year prior in 2017. Harvick is facing a surprising winless streak so the motivation is there, and we all know he has the talent to capture the checkered flag.

Tim: I think anyone would have to consider those two drivers for the win, however this will be a different race this year. The “Carousel” returns to the layout of the road course so we’ll see if that makes a big difference. In addition to Busch and Truex, I think you would also need to include Denny Hamlin and Kevin Harvick in that mix. Harvick is still looking for his first win of the season and Hamlin has been fast there before.

The K&N Pro Series West race will be held on Saturday ahead of the Cup race on Sunday at Sonoma Raceway. Hailie Deegan has already won twice this season ... do you think she can add a road course win to her resume this weekend?

Jim: I think Deegan will have to wait another day. Saturday's race is stacked with three full-time Cup Series drivers, two full-time Xfinity Series drivers and a number of others with far more road course experience than Deegan, including last year's winner, Will Rodgers. I would think Deegan would be satisfied with a solid finish that keeps her in contention for the K&N Pro Series West title.

Nick: I am going to say no, but I'd say that for most K&N regulars. This is going to be a stacked field with several Cup and Xfinity drivers among the entrants. I'd go with one of them to win the race.

Tim: I think she is plenty talented - and aggressive enough - to win on the challenging layout at Sonoma Raceway, but I also think it will not come this weekend. The announcement of several NASCAR national series drivers entered in the race I think will make that hill to high to climb for this weekend’s race. In addition to Austin Dillon, Noah Gragson, Cole Custer and others in the race, former event winner Will Rodgers has already proven he can get in done at Sonoma Raceway and he is actually my favorite to win again.