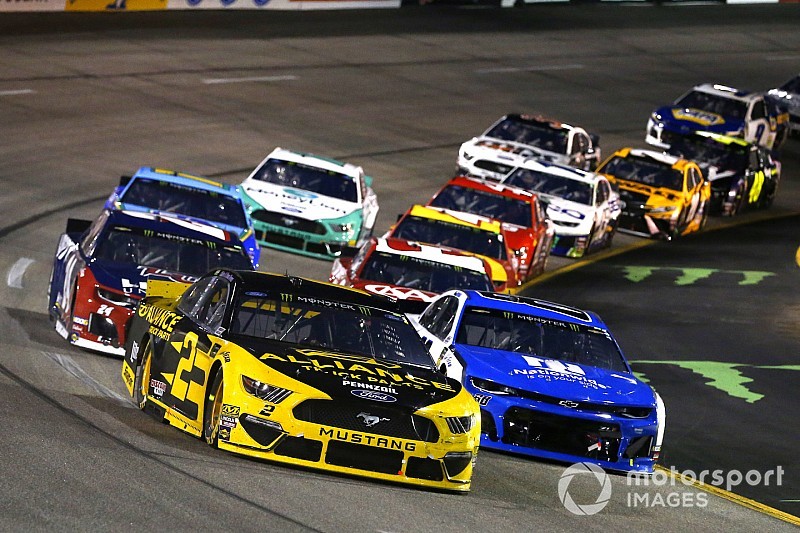 On this week's edition of the NASCAR Roundtable, we assess a grade to the new aero package and discuss the biggest surprises of the 2019 season so far.

What has been the biggest surprise so far this season in the NASCAR Cup Series?

Jim Utter: To me, it's probably a tie between the continued struggles of Hendrick Motorsports (and Chevrolet teams overall) and the fact none of Stewart-Haas Racing's four drivers have yet made it to Victory Lane. While only nine races into the season, the SHR winless streak stands out simply because of how dominant they were last season and in particular the No. 4 team of Kevin Harvick. The drivers are still getting good finishes but they certainly have not been leading laps and contending for wins on a weekly basis like they were one year ago. While HMS has shown some improvement over last year, including some better performances from Jimmie Johnson and the No. 48 team, it's clear they are still lacking something. The length of their winless drought - or even having drivers consistently run up front - has been surprising and puzzling to be honest.

Nick DeGroot: The lack of noise made by Kevin Harvick is near the top for me, more so than the continued struggles for Hendrick Motorsports. Additionally, I am surprised how Penske and Gibbs seem to have a stranglehold on the series right now. I expected there to be a lot of diversity in winners with the unknowns of this new aero package, but these two teams have jumped ahead of the pack.

Tim Southers: I must admit I’m surprised at how well the Ford Mustang has ran this season after the struggles the Chevrolet Camaro seems to still have in competition to win races. The Mustang has shown speed and the teams - especially the Team Penske cars - have shown speed and the ability to win races. I agree with Jim that I’m still trying to figure out why The Chevrolet still hasn’t won yet this year. As Jimmie Johnson said after Bristol he feels “the bleeding has stopped” and they are moving in the right direction, I honestly thought the Chevy would be better and the Ford might struggle.

At this point, what organization do you foresee making enough progress to join Team Penske and Joe Gibbs Racing in consistently winning races this season?

Jim: I still believe SHR will get to Victory Lane sooner rather than later. Its drivers are running well and earning strong finishes, they seem just to miss a little something to run out front on a regular basis, which generally translates to wins. I would be shocked if SHR doesn't have one or more drivers contending for the championship at the end of the year. However, the teams of Austin Dillon and Kurt Busch have shown speed all season and it would not surprise me if either managed to grab a win here shortly.

Nick: Even though it hasn't been Kevin Harvick, SHR has been knocking on the door. Clint Bowyer has come close multiple times and Daniel Suarez seems to only be getting faster. But if I had to pick a specific driver, I think Kurt Busch and that No. 1 team are close to reaching Victory Lane. While Larson struggles for results and luck really, Busch has been on it since Atlanta with his worse result since then being 12th.

Tim: Based on the performance of the Ford Mustang, I think the cars at Stewart-Haas Racing could start winning races and soon. I’m honestly surprised they haven’t won a race yet this season. Clint Bowyer showed speed at times in Richmond and Harvick has also been fast so it wouldn’t be a shock at all to see either one of them in Victory Lane sooner rather than later.

How would you grade the new aero package in Cup and why?

Jim: Probably a B- but it's hard for me to give an accurate grade when I think the circumstances of some of the races affected the outcomes more than the aero package. In particular, we've had several races already this season with very few cautions and extended green-flag runs. Long green-flag runs on bigger tracks that include green-flag pit stops are going to string out the field regardless of what aero package is being used. It even happens at Daytona and Talladega (especially when a lot of cars don't pit at the same time). I've seen promise though and think it will continue to get better. One caveat: I'm not certain why aspects of the package were adapted for short tracks. In my opinion, they should have just left those tracks' rules as they were.

Nick: C ... The hype hurt the perception of it, really. It's not the massive change everyone expected and it seems to have only helped marginally in some areas while hurting others. Yes, restarts are more exciting and some finishes have been closer, but at what cost? It's so difficult to pass, the cars are planted and we don't see anyone losing control anymore. Although the Richmond finish was solid, it pales in comparison to the one a few years back when they were racing three-wide for the win at the end. It hasn't really produced the increased level of entertainment that was expected/promised. So far, I believe that the cons have outweighed the pros.

Tim: With Talladega coming up in a couple of weeks I think that will be a big test with NASCAR deciding to run the tapered spacer I think a complete report card might be a little too soon. I think the grade now would be a B or maybe a C+. I think there have been more green flag passes for the lead and closer finishes, but I also think there are more opportunities to see the package in action. Then I think we can give a total grade on the new package.

Cole Custer and Christopher Bell have clearly separated themselves from the rest of the Xfinity Series field. Do you see any other driver(s) who will be able to match them?

Jim: In terms of speed and ability to contend, I think Justin Allgaier has shown he is just as good as both Custer and Bell. However, he's had numerous problems unfold during races which have prevented him from capitalizing on what have been very fast cars. I fully suspect he will rack up some wins before long and once again be a stout contender for the championship.

Nick: Justin Allgaier will, just give him time. He didn't luck into five wins last year and he's already knocking on the door. I'll even go as far as to say that those three will be battling for the title come Homestead.

Tim: Based on last weekend, I think Austin Cindric has the possibility to break out this season and win a race or two but I think the most consistent challenger to the two leaders in Christopher Bell and Cole Custer. If it weren’t for some mechanical issues and bad luck I think Justin Allgaier could be celebrating a win or two already this season.

Ganassi supportive of Larson and Chevrolet despite struggles