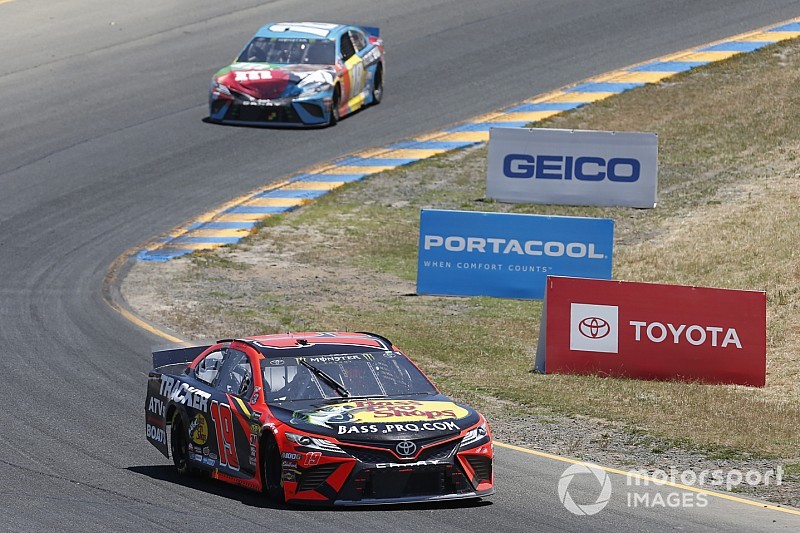 The Motorsport.com team shares their thoughts on NASCAR running the full Sonoma layout, the battle between JGR teammates Kyle Busch and Martin Truex Jr., and who is on the hot seat to get a win.

Jim: No. No. No. No one has had any issues with Watkins Glen or the races on the Xfinity schedule. One race without serious on-track incidents at Sonoma and everyone to change everything (as is the typical response). Besides, half the reason for the stages was to build in TV breaks, so now we want even MORE green-flag time not seen on TV? Just leave it the way it is.

Nick: I mean, I understand now wanting to change things but with how predictable the strategy is during the first two stages at road courses now, I would like to see the mandatory caution taken away. That's part of what makes road course racing interesting to watch in my opinion and something is lost with these predictable yellows.

Tim: I think it would just make fans upset with more change and to be honest, I think the restarts after stage breaks have provided some of the most exciting moments in races. I know the breaks have changed a lot of in-race strategy, but I feel this could only rock the boat more with fans instead of making them happy.

The Carousel was used for the first time in over two decades last weekend at Sonoma Raceway. Did you think running the different layout enhanced the racing or no?

Jim: I think it made for a far more interesting course and in my opinion also required more finesse from the drivers. It certainly was a flash point of action in Saturday's K&N Pro Series West race and was used by Noah Gragson for an excellent passing opportunity. I would keep it.

Nick: I like it. Just because this race wasn't that memorable doesn't mean it is the layout's fault. It's a great section of the track that should remain part of future NASCAR races there.

Tim: I think it should stay as I felt it added extra opportunities for passing and action on the course. I think it made the drivers step up their game and that’s always good for the fans.

Who do you think is starting to feel the pressure of getting a win as we enter the final two months of the regular season?

Jim: Outside of Chase Elliott who already has a win, I think the other three drivers at Hendrick Motorsports definitely need to look for a victory in the next two months to secure their playoff invites. Kyle Larson, too, needs to find a way to get locked in or he could be on the outside looking in as well. Erik Jones is the only driver at Joe Gibbs Racing without a win this season and could certainly use a win to ensure he joins his teammates in the championship hunt.

Nick: Stewart-Haas Racing isn't in a bad position points-wise, but surely they are feeling the pressure. This drought is so unlike them and has to be weighing on the organization as they search for answers. But in terms of playoff pressure, I'd say Jimmie Johnson. The seven-time champion has never missed the playoffs (I believe) and is on the outside-looking in right now.

Tim: I’ve written this before and I will repeat that I’m shocked Kevin Harvick (or any driver at Stewart-Haas Racing) has yet to win a race this season. One might think working with the new Mustang might be a reason but Team Penske has had two of their three drivers win so far this season so I don’t think you can say it’s the car. As for playoff berths, I agree with Jim Utter in that the three Hendrick Motorsports drivers are probably feeling the most pressure to get a win before the end of the regular season.

How surprised are you that Martin Truex Jr. has now equaled Kyle Busch for the most NASCAR Cup Series wins of the season so far?

Jim: A little but only because it seemed to take him and his No. 19 team a little longer to get up to speed. But honestly, that's not surprising considering the move he and crew chief Cole Pearn made to join the organization. Right now, they look like the same dynamic duo they were in recent seasons at Furniture Row Racing and it would not surprise me to see him supplant Kyle Busch for the most wins this season.

Nick: Not surprised at all. Truex and Busch went head-to-head when he was still part of Furniture Row. Bringing Truex and crew chief Cole Pearn directly into the JGR fold was only going to make them stronger. It took them a little longer to find their footing this season, but once they found it they've been very quick. I look forward to seeing those two personalities go at it for the title this year. It will be interesting to watch now that they're on the same team.

Tim: I honestly thought Kyle Busch was going to run away with the regular season and maybe even approach 10 wins and I wasn’t even thinking of Martin Truex Jr. to enter the ‘most wins’ conversation. So I’m pretty surprised Truex has made the run he has made over the past month or so of the regular season.