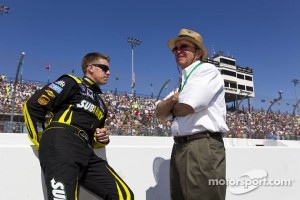 From the moment Roush Fenway hit the pavement at LVMS, great results have been harvested by Jack Roush’s multi-car racing operation. Roush Fenway enters this weekend as the defending winner in the Sprint Cup race, having won its 15th NASCAR event at LVMS in 2012.

“Over the years we’ve had more success at Las Vegas than most places, and our intention is to go there and expand on our performance there this weekend,” said Jack Roush. “It was a great honor to win the first race there in 1998, and we continue to look forward to going there, because we’ve had so much success there, winning with Mark (Martin), (Jeff) Burton, Matt (Kenseth) and Carl (Edwards).

Roush Fenway won the inaugural Sprint Cup event at Las Vegas in 1998 (leading 119 laps in the process), but it fielded the race’s runner up, while placing three cars in the top five (Martin 1st, Burton 2nd, Johnny Benson 4th) and five cars in the top 10 (Ted Musgrave 6th, Chad Little 10th). To this day the performance is one of the strongest in the team’s “25 Winning Years” in NASCAR. The win was the second for Roush Fenway at Vegas, as the team won the truck race there in 1997 with Joe Ruttman.

The win would go on to be just one of the more eventful 15 NASCAR victories for Roush Fenway at Vegas, and it would prove to be a springboard for a track that is considered one of the team’s strongest.

This year Roush will look for back-to-back wins in the Sprint Cup Series at LVMS for the fourth time, having accomplished the feat in 1998-1999, 1999-2000 and 2003-2004. RFR won the first three Sprint Cup events at LVMS and three of the first five NNS races there.

“As evidenced by Carl’s win there and our strong performance a season ago Las Vegas has been, and continues to be one of the strongest tracks on the circuit for us; as is that style of track in general.

“One of our team strengths after two decades is our performance at the mile-and-a-half race tracks,” added Roush. “We like to think we are more in control of what happens on the race track and being able to orchestrate a good outcome based on strategy, the quality of work in the shop and the quality of people behind the program. The strength of our drivers and the people behind the programs have been well suited for Las Vegas and that style of racing and we are anxious to get out there this weekend.”

Biffle could become the first Roush Fenway driver to win in all three series at Las Vegas, with a win there this weekend in the Sprint Cup race. The organization will field five entries in the two events this weekend, with two entries in Saturday’s Nationwide race and three in Sunday’s Sprint Cup event.

Saturday’s Nationwide race is set for 4:00 p.m. EST and will be televised live on ESPN2. Sunday’s Sprint Cup event is slated for 3:00 p.m. EDT on FOX.

Stewart looks for win at Las Vegas this year

Smith heads to Las Vegas on a positive note