© 2021 Motorsport Network. All rights reserved.
TV Tickets Fashion Giorgio Piola Jobs
Previous / Vickers and Waltrip happy with the 2012 season so far Next / Biffle talks about what it takes to win at Martinsville
NASCAR Cup News

RFR has won four Cup races at Martinsville; Spring 2002 might have been team’s strongest effort at track

This season Roush Fenway Racing celebrates its ’25 Winning Years.’ As part of the program each week a different moment from the team’s legacy will be highlighted in the 25 Winning Years segment. 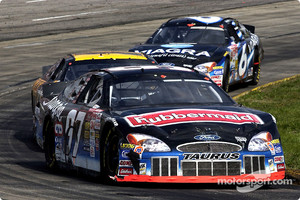 MARTINSVILLE, Va. (March 31, 2012) – Roush Fenway Racing has won four times in the Sprint Cup Series at the paper-clip oval of Martinsville Speedway, but it might have posted its strongest Martinsville outing just over a decade ago on April 14, 2002 when RFR placed all four of its Ford Taurus’ inside the top 10.

Matt Kenseth led the way with a runner-up finish; his career best at Martinsville. Mark Martin brought the No. 6 Ford home in eighth, while Jeff Burton was 9th and Kurt Busch 10th. Roush Fenway used the outing to leave Martinsville second and third in the Cup point standings, en route to a runner up finish in the final standings and three RFR Fords would go on to finish inside the top 10 in the 2002.

All in all Roush Fenway has won six times in NASCAR action at Martinsville, with five different drivers. RFR has four wins in the Cup series at Martinsville, split between three drivers (Burton, Martin and Busch), with Martin winning twice. Martin earned RFR’s first NASCAR victory at Martinsville in 1992.

RFR posted a one-two finish at Martinsville in 2000 - with Martin and Burton claiming the first two positions - but will look to place two cars in the top five this weekend at Martinsville, for the first time since that day.

Roush Fenway has also won twice at Martinsville in the NASCAR truck Series, with Jon Wood in 2003 and Ricky Craven in 2005.

Biffle talks about what it takes to win at Martinsville