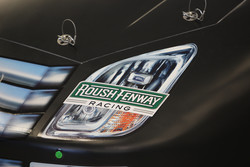 CONCORD, N.C. (March 16, 2011) – Fresh off a strong performance at Las Vegas followed by an off weekend, Roush Fenway Racing rolls into Bristol Motor Speedway looking for its 18th win in NASCAR competition.

As the series hits the .533-mile track, described by some drivers as the equivalent of ‘jet fighters, racing around a football stadium,’ team owner Jack Roush can take a moment to reflect on his long history at the facility.

“I went to Bristol for the first time (with NASCAR) in 1988,” said Roush. “But I had had a great deal of success there and won on the drag strip at Bristol with the Fastbacks years before that.

“Bristol has always been a place that had two complexes,” added Roush, who’s NASCAR teams have made 240 starts at the half-mile oval track. “It had a drag strip up in between the hills and it had an oval track.

Just as with the drag racing, success on the oval at Bristol would soon follow.

“Mark Martin was so enthused when he had a chance to go to Bristol,” recalled Roush. “It was fast and high-banked and he was able to get in the gas and not worry about a lot of finesse and it was one of his favorite places. He had a good feel for it and a great enthusiasm and eventually we realized the kind of success on the oval track that I had on the drag strip before that.”

Roush Fenway finished second in its first NASCAR Cup start at Bristol in the spring of 1988. Martin and Roush won at Bristol from the pole in the fall of 1993 and opened the floodgate for the organization’s unparalleled amount of success at the track.

All in all Roush Fenway has won at Bristol in all three of NASCAR’s major series for a total of 17 victories (including 10 in the Sprint Cup Series), with the victories spread out over six drivers. In the Cup series Roush Fenway swept the track in 2003 and put a Cup car into victory lane in eight of the last nine seasons.

Are better days ahead for Roush Fenway Racing?