CONCORD, N.C. (Nov. 19, 2013) – Roush Fenway Racing (RFR) has announced it is reorganizing its crew chief lineup in 2014. Mike Kelley, who has served as the crew chief on the No. 6 NASCAR Nationwide Series (NNS) team for the past four seasons, will move to the Sprint Cup Series, where he will reunite with Ricky Stenhouse Jr. on the No. 17 NASCAR Sprint Cup Series team. 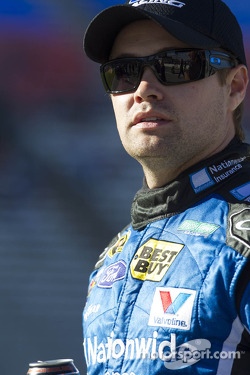 “It’s really exciting to team back up with Mike,” said Stenhouse, the 2013 Sprint Cup rookie of the year and two-time NASCAR champion. “Obviously we have a great chemistry and we have had a great deal of success in the past. Scott (Graves) did a great job of guiding us through our rookie season this year and we look forward to continuing that growth next season.”

Kelley and Stenhouse partnered to win NNS championships in 2011 and 2012. Kelley has been a staple of the RFR organization for the past decade, serving as the car chief on RFR’s No. 97 Sprint Cup Championship team in 2004. He most recently worked with Trevor Bayne this season, leading the team to a sixth-place finish in the NNS points, including 20 top-10 finishes, a pole and a victory at Iowa.

Veteran crew chief Chad Norris will take the helm of the No. 6 AdvoCare team with Bayne, which will look to be a front-runner for the 2014 NNS title. Norris boasts an extensive resume as a crew chief, having worked with legendary drivers such as Mark Martin, Matt Kenseth, Darrel Waltrip and Carl Edwards. Norris led Bayne to his first career NNS win at Texas in 2011.

Scott Graves, who helped lead Stenhouse to the 2013 Sprint Cup rookie of the year award as the crew chief of the No. 17 NSCS team, will crew chief former ARCA Champion Chris Buescher in the historic No. 60 car. Seth Barbour, who was impressive in his performance with Buescher and Ryan Reed in 2013, will sit atop the No. 16 NNS Ford full time with Reed in 2014.

On the Cup side, legendary crew chief Jimmy Fennig will again lead the No. 99 Fastenal team with Carl Edwards and Matt Puccia will once again team with Greg Biffle and the No. 16 3M team.

“As with any season we always sit down at the end of the year and evaluate where we are, what we have and what we think are the best options to put our teams in the best position to compete for wins and championships,” said team owner Jack Roush. “In this case, a reorganization that realigns Ricky and Mike, allows Scott (Graves) to work with Chris (Buescher), and reunites Chad with Trevor, made the most sense.

“Scott (Graves) will help provide Chris (Buescher) with the type of guidance that helped Ricky improve throughout this season and close out the rookie award,” added Roush. “Chad (Norris) will bring veteran leadership and a steady hand to the No. 6 team with Trevor (Bayne) that we feel will be beneficial and Seth (Barbour) and Ryan (Reed) have exhibited a strong chemistry that the team is excited to build on in 2014.”