Rusty Wallace, driver of the No. 2 Penske Racing Dodge, today announced that 2005 will be his final year on the NASCAR NEXTEL Cup tour. Wallace's final season will be nicknamed "Rusty's Last Call" and serve as a season long celebration of Wallace's ...

Rusty Wallace, driver of the No. 2 Penske Racing Dodge, today announced that 2005 will be his final year on the NASCAR NEXTEL Cup tour. Wallace's final season will be nicknamed "Rusty's Last Call" and serve as a season long celebration of Wallace's illustrious career in NASCAR Cup series racing. 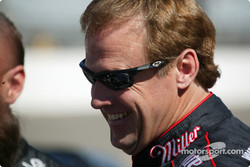 Rusty Wallace.
Photo by Dan Helrigel - IRL.
"There comes a time in every driver's career when he must decide to hang up his helmet for good, and I have concluded the best time for me to do that is at the conclusion of the 2005 season," Wallace said during his announcement at Daytona USA on Monday, August 30th.

"I've done a lot of soul-searching and got a lot of input from my closest associates and my family. With that in mind, I am prepared to end my driving career at the end of the season next November and move on to another chapter in my life."

Wallace's career has had its share of ups and downs that is typical in any form of motor sports; however, he has always maintain a friendly demeanor to the fans and the press. The 1989 Cup champion currently has a total of 55 Cup career wins, the first victory came at the half-mile Bristol oval in 1986.

"At the end of 2005, I'm hanging my hat up from driving and staying involved on the business end of it. I've got a lot of plans with Team Penske, and we'll talk more about it later," Wallace summarized. He went on to state that the death of friend Dale Earnhardt helped him make a decision when the question on when to retire. "I knew it was the right time, and when Dale lost his life it did bug me a lot.

"We did a lot of vacationing together. We spent some time in the Bahamas, not a lot, but a little bit. I remember Dale helping my son Stephen learn how to shoot a gun. I remember the time he loaded me up with ammo to go down to A.J. Foyt's ranch to hunt deer.

"He really helped me a lot. I was on the boat that night before he died the next day, and I thought 'man, this sucks, this is not right.' Mr. France told me at the hospital that night, he said, 'don't (remain) in this thing too long kid.' 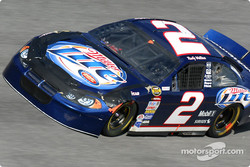 Rusty Wallace.
Photo by Eric Gilbert.
Like many NASCAR drivers, Wallace came onto the scene in 1973 running the short-track circuits. From 1974 to 1978, he won over 200 feature races. He then moved up the ladder before running his first Cup race.

Wallace will remain on the racing circuit with Penske's Cup team in a to-be-name position and his own company, Rusty Wallace, Inc., which currently fields Jamie McMurray in the Busch series.

Wallace's last race win came at Martinsville in April of this year. He is looking forward to his final season, "It's gonna be a season full of fun and success -- and probably some controversy along the way," Wallace said. "I am looking forward to next season and to everything the future has in store for me after I've taken off the driver's uniform for the final time next November."