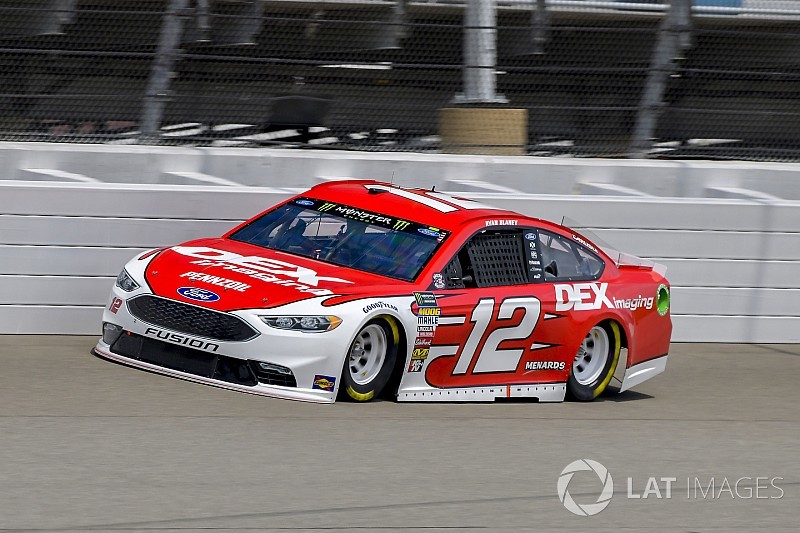 Ryan Blaney held off Kyle Larson in a one-lap dash to claim the Stage 1 victory at Michigan International Speedway.

Sunday’s race finally got underway after about a 2 ½ hour delay due to rain.

Kurt Busch, the pole-winner, took command early, leading all the way to the competition caution, which was displayed on Lap 25.

All of the lead-lap cars elected to pit with Kurt Busch taking just two new tires and remained in the lead on the restart on Lap 30. He was followed by Harvick and Hamlin, both of whom also took two tires. Keselowski restarted fourth, the first car with four new tires.

Both Erik Jones and Paul Menard had to restart from the rear of the field because they were penalized for speeding on pit road.

Keselowski moved into the second position behind Kurt Busch on the restart as Harvick dropped to third.

On Lap 37, Darrell Wallace Jr. got into David Ragan in Turn 2 to bring the caution out. Ragan had extensive damage to his car from the incident. The race returned to green on Lap 41 with Kurt Busch still out front followed by Keselowski and Harvick.

Blaney moved up into the runner-up position on the restart as Keselowski dropped back to fifth.

With 15 laps to go in the stage, Blaney was on Busch’s bumper trying to attempt a pass for the lead, with Bowyer up to third.

On Lap 48, Blaney finally got a run on Kurt Busch and got around him to take the lead for the first time in the race.

The caution was displayed again on Lap 58 when Matt Kenseth spun off Turn 4. The race returned to green with one lap left in the stage.

Three drivers – Kyle Busch, Jones and Hamlin – had to start the race from the rear of the field after each car was found to have non-compliant splitters during pre-race inspection.