Ryan Blaney's admiration for Tony Stewart goes back to his childhood 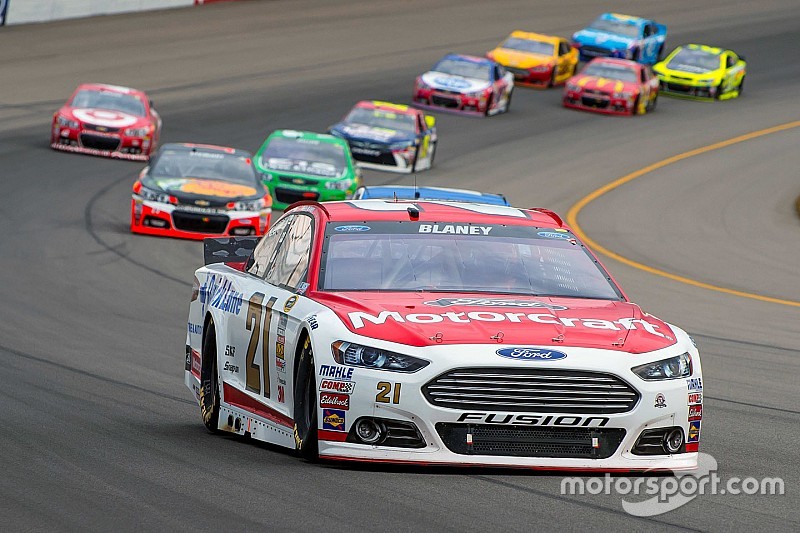 Ryan Blaney was either too young or too tired to remember one of his first experiences with Tony Stewart.

On the Saturday before the 2004 August race at Michigan, Stewart and Ryan's father, sprint car superstar Dave Blaney, flew to Sharon Speedway, which was partially owned by the Blaney family. Ryan, then 10, went along for the ride but nodded out on the way back to the airport.

Since Ryan was fast asleep, Stewart gently lifted the youngster from his seat and carried him onto the plane. Blaney’s slumber was never interrupted.

“I’m just glad that I had to carry him then and don’t have to carry him now,” said Stewart, who is retiring from Sprint Cup racing at the end of Ryan Blaney's first full-time season at NASCAR's highest level. “He’d be a little heavier now than he was then. You know, it’s kind of neat. It’s not really a changing of the guard but it’s the natural progression.”

Stewart's respect for the Blaney family

At the time, Stewart, who is the defending World of Outlaws championship team owner, was a fan of the elder Blaney, who won the 1995 WoO title and finished second four times.

“I remember that night,” Stewart added. “We were flying Dave back and I’m thinking, ‘Dave Blaney is on the plane with me. That’s pretty cool — and his little punk kid.’ And now his punk kid is a really cool kid that I get to race with every week. It’s just part of the progression. Ryan is a kid I really like. And I think he’s going to do a lot of really great things.

“He’s finally with a team (Wood Brothers Racing) now — and even though it’s their first year that they’ve gone back to full-time racing — he’s with an awesome family of racers. I think he’s the kind of guy that respects that and appreciates that.”

Blaney does. The 22-year-old fourth-generation racer believes coming from a similar background as the Wood Brothers is what connects him so closely to the team.

“My family comes from racing,” Blaney said. “That’s really all I know. Their family comes from racing — and it’s a family deal. I think that’s what’s connected us very well from the start of last year. That’s why we’re so close. That’s what we did growing up. We were always at the race track all the time, that’s what we cared about. That connection has been really good for us.”

Although Blaney has no recollection of Stewart cradling him in his arms that night leaving Sharon Speedway, he’s always had tremendous admiration for the three-time champion who was one of the few drivers that made the transition from dirt to asphalt seem easy.

“I have a lot of respect for people that start on the dirt and come over to NASCAR and have success,” Blaney said. “Tony, Jeff (Gordon), Kyle Larson, Kasey Kahne, that’s tough to do when you’ve run on dirt for most of your life. My dad did the same thing. At the time he might not have been as success as those guys, but that’s a tough thing to do.

“You see a lot of guys try it and it doesn’t work out. So the people that can transfer over — and Tony doing IndyCar stuff, too, and winning in that, just all forms of racing that he’s dominating in and winning in, that just proves he’s a very diverse and great race car driver. How could you not have a respect for a guy like that? Even if I didn’t know him personally, I would have great respect for what he’s done. All the things he’s driven and won in, that’s a pretty incredible race car driver.”

What Tony does for dirt racing

Blaney feels for the times Stewart has been sidelined by injuries over the last few years. He feels extremely fortunate that he’s had the opportunity to race against Stewart in his final year. As much as Blaney has treasured his time with Stewart in the NASCAR garage, he believes the driver/team owner/track operator’s contributions to the sport are equally impressive.

“He’s not the kind of guy that does something for somebody and wants everyone to know about it. He’s genuinely a nice guy that does stuff for people and never takes credit for it. Early in my career when we were trying to figure out what to do, he gave myself, my dad, a lot of advice, because he’s been through it all. His advice really worked out.

“Aside from my racing, my dad’s dirt track up in Ohio, he always makes a trip out there and he’s always good to the fans. It’s not only on the NASCAR side that he’s done a bunch on, it’s helping local race tracks. Heck, you see him at the dirt tracks. He owns a series now and he goes out there every weekend, man. He flies to and from NASCAR races to dirt tracks every week. It’s unbelievable. That just shows you his compassion and the things he does to keep that racing alive. As for me, he definitely helped out a bunch when we were trying to get started.”

This weekend, Blaney is carrying a retro-paint scheme from David Pearson’s 1976 season when the No. 21 car won 10 races including the Southern 500. As for critiquing Stewart’’s driving style, Blaney says the veteran reminds him of the Silver Fox.

“Tony, to me, is like a David Pearson, to be honest with you,” Blaney said. “He’s always been really aggressive but smart about everything. It’s been great to run with him for the past couple of years and run with him his last season. I grew up a Tony fan. He’s been a good friend of our family over the years and I hope he stays around the sport a bunch once he gets out of it.”

Opinion: How Bowman performs now will set the course for his future

Bowman: "It's crazy" to get more races than Gordon as Earnhardt's sub