Ryan Newman: his love for Darlington not just a fish tale

As the story goes, the 1.366-mile oval is uniquely configured thanks to a pond that its owner refused to relocate when constructing the racetrack in the late 1940s. The track’s architect made one end of the track tight, narrow and high-banked while the other he made wide, sweeping and flat. 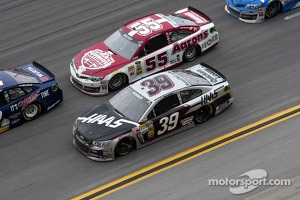 The resulting egg-shaped layout has created quite the challenge for engineers, crew chiefs and drivers for decades. But the small pond located right outside the racetrack was not disturbed and could still be fished.

Not surprisingly, Newman ranks the South Carolina racetrack among his favorites, considering he’s an avid outdoorsman who has been fishing as long as he has been racing – since the age of 4.

But it isn’t simply the fact there’s a pond right outside the racetrack that makes the driver of the No. 39 Quicken Loans Chevrolet SS for Stewart-Haas Racing (SHR) look forward to the 64th annual running of the Southern 500.

While he’s fished the pond, his affinity for the place is mostly because of its on-track action.

For Newman, there’s nothing quite like the challenges of racing at Darlington, where drivers and their teams are constantly adjusting to the tires, the bumps and the overall character of the racetrack – and racing that predominantly occurs just inches from the outside SAFER Barrier.

From racing the racetrack to racing the 42 other competitors on the track, Newman says there’s none better on the circuit. It’s the most challenging and the most rewarding. It’s also one of the most historic Sprint Cup races, which is why a win at the Southern 500 ranks among the top wins a driver can earn, in Newman’s opinion.

While the Sprint Cup veteran has yet to find victory lane at the 1.366-mile oval, he has amassed impressive stats at the “Track Too Tough To Tame.”

Newman has scored top-five finishes in half of his 14 starts at Darlington, and also has nine top-10s.

His best finish at Darlington came during his rookie campaign in the fall 2002 Southern 500. In just his second start at the legendary racetrack, Newman was 12th on the grid, led one lap and finished second to Jeff Gordon. Newman also had a third-place finish in spring 2004, fourth-place efforts in 2007 and 2009, and fifth-place runs in the spring 2002, 2005 and 2011 events at Darlington.

And since joining Stewart-Haas Racing in 2009, Newman & Company has produced solid performances at the racetrack. Newman has not started worse than sixth in the No. 39 car, and has two top-five finishes and three top-10s in four starts.

With Newman’s recent history at Darlington, this could be the year for him to “Bring it Home” in the form of a victory in the Southern 500.

RYAN NEWMAN, Driver of the No. 39 Quicken Loans Chevrolet SS for Stewart-Haas Racing:

Talk about racing at Darlington Raceway.

“Well, I’ve always said this is one of my favorite racetracks. I really look forward to it, just racing the racetrack and the competition. The way you drive this racetrack, it’s rewarding in several different aspects, but it can reach out and bite you at any second. It has always been my favorite track because you’re always adjusting. You adjust to the tires, the bumps, the character of the track. The fact that you’re running right next to the wall is challenging. It’s the most challenging track we have and that’s why I enjoy it the most.”

You mentioned that Darlington is 90 percent about the wall collecting right sides and fenders. Do you consider that something you can use to your advantage?

“I guess it’s an ally. You just have to respect the track. I enjoy racing there. I always have, from the very first lap I went there with Buddy Baker. The opportunity to drive there in the Nationwide Series was a lot of fun. On the racetrack and off, I like the area, I like the people, I like the places, I like the history of NASCAR. The racetrack just makes it that much more icing on the top of the cake, and I like icing.”

“Racing-wise, I’ve always said Darlington is not the perfect racetrack. To me, it’s my favorite racetrack to drive. But, racing-wise, going three- and four-wide, you’re not going to see that at Darlington. It’s going to be a very important track-position race in the sense that, if you’re out front, it’s going to be easier to stay out front because it’s difficult to pass there. It’s always been a give-and-take racetrack. It’s a give-and-take racetrack when it comes to passing.”

What would a win at Darlington mean to you?

“Winning a Southern 500 at Darlington has always been a goal of mine. For me, personally, it ranks right up there with the Daytona 500, the Brickyard and the Coca-Cola 600, as a race I want to win before I retire. I’ve always considered myself to be a driver who appreciates the history of our sport and someone who respects the drivers, the races – really, everything that has come before us. The Southern 500 is part of this sport’s heritage. It’s tradition. It’s been such an important race and the track has been such a legendary place to race that, to be added to the list of drivers who have won it – David Pearson, Dale Earnhardt, Richard Petty – is a dream of mine.”