Pole sitter for the second Gatorade 125 event, Elliott Sadler, beat back the pack and brought the No. 38 RYR Ford to victory lane. Sadler starts second for Sunday's Daytona 500. Elliott Sadler. Photo by Eric Gilbert. "This is big," said ...

Pole sitter for the second Gatorade 125 event, Elliott Sadler, beat back the pack and brought the No. 38 RYR Ford to victory lane. Sadler starts second for Sunday's Daytona 500.

Elliott Sadler.
Photo by Eric Gilbert.
"This is big," said Sadler. "To sit on the outside pole of the Daytona 500 with the best that everybody brings. I've just got to thank M&M's and Robert Yates Racing for giving me a chance."

"I'm just glad that we are the underdog," continued Sadler. "Hopefully we can give ya'll something to write about on Sunday."

Sterling Marlin powered past the No. 29 of Kevin Harvick in the races closing laps, to garner second.

"Well I had two or three good runs on Kevin (Harvick) down the back straightaway and down the front," said Marlin. "I just kind of waited. We had all of them Chevrolets lying there, and if I went with two or three laps to go I would have finished sixth or seventh. It looked like Kevin laid up trying to get a run on Elliott (Sadler) off of turn two and he pushed and had to get out of the gas. That gave us a real good run at him going down the back straightaway."

Jimmie Johnson and Mark Martin hooked together the No. 48 Chevy and the No. 6 Ford in the draft to power them to third and fourth place finishes. 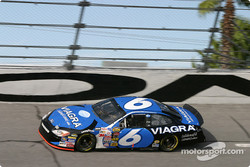 Mark Martin.
Photo by Eric Gilbert.
"They (the team) gave me great pit stops," said Martin. "This is just a preview of 2004 with the new Ford Taurus and the Ford power under the hood and this is a great race team. We couldn't win today, but we had a great run. I think if we can find it, it's in that car - if we can just find it."

Failing to make the field for the Daytona 500 were the cars of Andy Hillenburg and Kurt Shelmerdine. Notably, after engine troubles in the initial 125 event, four-time Winston Cup champion Jeff Gordon starts 39th.