Should Marcos Ambrose be penalized for punching Mears?

I may be in the minority with my friend Ryan Hyatt, but here are my thoughts on what we should do about the fight that ensued after the checkered flag flew at Richmond last weekend...

At the conclusion of the NASCAR Sprint Cup race at Richmond, we saw the usual short track antics during post-race coverage. Cars bumping into each other on the cool-down lap, drivers wagging their fingers, animated interviews, but we also saw something that hasn't happened in quite a while. Well, that is unless you're a regular at Bowman Gray.

In the garage, a shoving match ensued between Casey Mears and Marcos Ambrose. The Aussie was exasperated past his breaking point when Casey started pushing him and slugged Mears right in the face. It was the first time we've seen a NASCAR driver actually land a punch in a long time and opinions are swirling about how NASCAR should handle it.

How about we give them a trophy? Just to please those foaming at the mouth for Marcos to get slammed to the ground by NASCAR, go ahead and fine him, put him on probation; but that's just a slap on the wrist no matter how you slice it. When they questioned Robin Pemberton, he didn't seem all that bothered by what went down, which I was pleased to see.

I'm hearing a certain contingent of people out there treating this quite arbitrarily and getting a bit too carried away with it. They are acting like Casey Mears is lucky to have escaped with his life after the malicious and unprovoked attack by Rambo Ambrose. Some say throw the book at him, I say throw confetti at him. 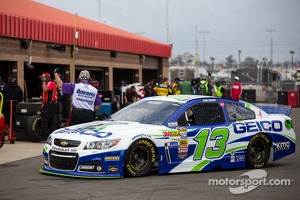 I have a few reasons why they shouldn't reprimand Marcos. First of all, kudos to Mears and Ambrose for dealing with their disagreement with fists and words instead of their cars. NASCAR has gotten a ton of publicity out of the fight and will certainly use that footage in future promotional ads.

So why are we going to punish a driver for something that gets people talking about NASCAR and gets us some extra eyeballs from some curious casual fans? Something that we are more than willing to use to promote races and entice viewers to watch in the future? Heck, they are still using the footage from the brawl between Gordon and Bowyer from back in 2012.

And guess what launched NASCAR into the national spotlight 35 years ago and helped make it into the billion dollar business that it is today? Yep, a fight.

No matter what side you're on, we should all be happy that it was a punch and not a punt. Too many race outcomes get altered and too many cars are destroyed by drivers who retaliate on the race track and then refuse to face the person afterwards. Not to mention that innocent bystanders sometimes get caught up in the mess. Don't forget the elephant in the room either - who has to fix those wrecked cars? 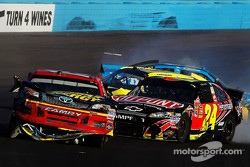 It's the hard-working, blue-collar crew guys that have to work late and are forced to spend less time with their families repairing those machines that they already worked so hard to build. If anything, Marcos and Casey should be commended for settling it like men after the race. Face-to-face, yelling it out, and when that doesn't help resolve the issue .... well, you see what happens. Today, Casey says that it's water under the bridge and after talking to Marcos on the phone, they've both moved on.

Now that's how it's done. No wrecking each other and then seething about it for six months. No arguing on Twitter or impersonal apologies through text messaging. No saying that you're going to do something that you're never actually going to do. They had an issue on the track so they bickered about it, then fought about it, and put it behind them the very next day. Cale Yarborough would be proud.

Call me old fashioned but that's what I like to see. Instead of turning what is supposed to be the pinnacle of North American motorsport into a backwoods demolition derby, let's hash it out in the garage after the race, man-to-man. Yeah, it was a bit imprudent to just slug someone in the face but it happens. Emotions run high when there's so much at stake. It's not like Marcos committed some heinous crime like some people are trying to sell.

I'm not calling for unmitigated free-for-alls that resemble a bizarre episode of UFC Fight Night after every race either. I just believe that when tempers run high and you're in the heat of the moment, it's okay to throw down; at least every once in a while. This isn't a sport for those who always mind their p's and q's. This is intense, knock-down, drag-out, gloves off, grit your teeth, wear your emotions on your sleeve, take what you can and give nothing back racing.

The biggest surprises of the 2014 NASCAR season so far

One year later, Gilliland ready to be 'pushee'