Harvick holds off SHR teammates for Stage 2 win at Talladega 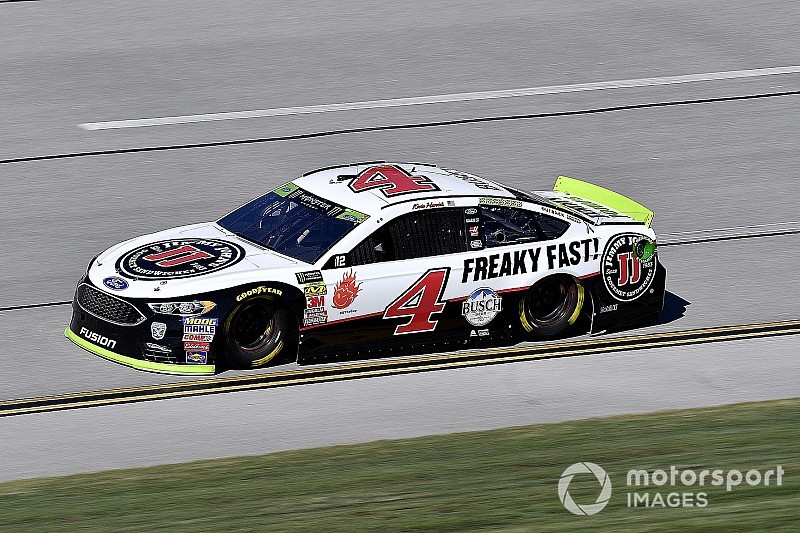 Harvick picked up the 15th stage win of the 2018 season as he led his three SHR teammates – Clint Bowyer, Kurt Busch and Aric Almirola – across the finish line. Denny Hamlin completed the top-five.

Following the break between Stages 1 and 2, all of the lead-lap cars elected to pit with Blaney the first off pit road and taking over the lead on the restart on Lap 61.

Chase Elliott had to restart from the rear of the field after running out of fuel and pitting one lap before the conclusion of Stage 1, when pit road was closed.

On Lap 63, Jimmie Johnson spun exiting the tri-oval, ran into the infield and slammed into the infield wall to bring out a caution. All of the lead-lap cars elected to pit with Harvick was first off pit road and he took over the lead on the restart on Lap 67.

After the restart, Kyle Busch and two of his Joe Gibbs Racing teammates worked the high line and was able to keep pace with the Fords on the bottom lane.

Busch was able to edge out front for the lead briefly before Harvick moved back out front.

By Lap 70, Harvick and his three SHR teammates had broken away from the pack.

With 25 laps remaining in the second stage, Harvick continued to hold a small lead over Bowyer as his two other SHR teammates remained in third and fourth. Hamlin was running in fifth.

With 15 laps remaining, Alex Bowman and Kyle Busch tried to form an outside line to challenge the leaders but proved unsuccessful.

A six-car breakaway led the by SHR cars and leader Harvick continued to dominate with 10 laps left in the second stage.

Several lead-lap cars elected to pit under the caution but Harvick stayed out and remained out front when the race returned to green with three laps left in the stage.