Smith heads to Las Vegas on a positive note 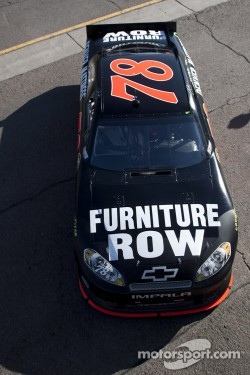 DENVER, Colo. (March 8, 2012) – Two down and 34 races to go and already Regan Smith is seeing a positive trend despite finishes of 24th in Daytona and 20th in Phoenix.

The Furniture Row Racing driver was in position to post top-10 results in each of the first two Sprint Cup events, but late-race incidents spoiled his performances.

The culprits were a multicar accident in the opening Daytona 500 and running out of fuel in Phoenix. He was positioned in 10th-place in Sunday’s race at Phoenix until his car started to sputter with an empty fuel tank with nearly two laps remaining.

“Squandering top-10s is unsettling,” said Smith, who is currently 19th in driver points. “But considering what happened to our team in the late stages of the first two races our finishes weren’t too bad.

“I am also aware that the Daytona and Phoenix finishes could have been much worse after getting collected in an accident and running out of fuel. They most likely would have been worse last year. As I have stated, our goal in 2012 is to make our bad or hard-luck days better than they were in 2011. So far we’re on track with that goal.”

Smith noted that when he ran out of fuel while running in the top-10 in New Hampshire last July he finished 33rd and when he got collected in an accident at the first Phoenix race of 2011 he left the 1-mile oval with a 34th-place result.

“Now we have to overcome Las Vegas,” noted Smith, who suffered an engine failure last year and finished 39th.

“Judging from the first two races we know if we can finish the race clean, we’re going to have a good result,” explained Smith. “The performance is there, we just need to capitalize on what we have and produce a strong finish. Las Vegas is a mile-and-a-half track that we like and this will be a good test for us to see how we fare at an intermediate track, which makes up the bulk of our races.”

Dale Jr. on Regan Smith: “I’m thrilled to have him back”