So, are you enjoying TCRPTJWW400ATBPBBMR.com? 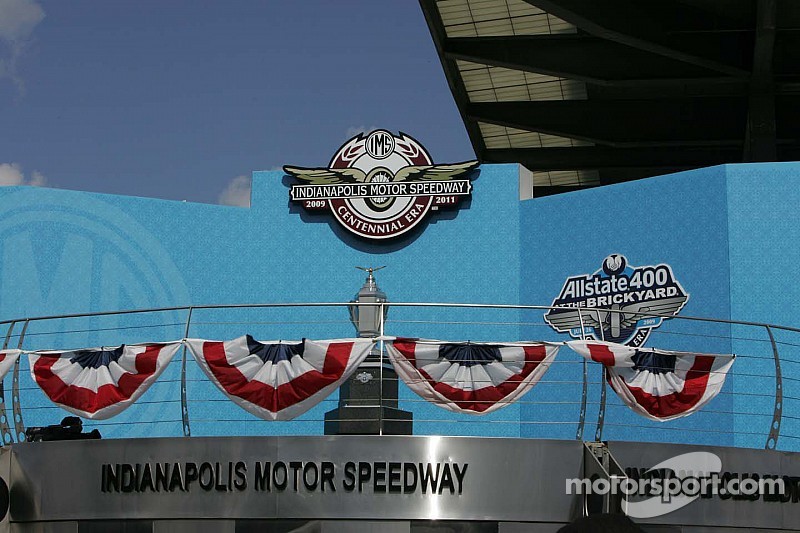 That's the official name of the Brickyard 400. And yes, it's ridiculous.

Are you sitting at home watching the NASCAR race?

Which race are you watching – The NASCAR Sprint Cup The Crown Royal Presents the John Wayne Walding 400 at the Brickyard Powered by BigMachineRecords.com, part of the Kroger Super Weekend at the Brickyard?

(Sorry, I think Trevor Bayne just spun, there was a yellow flag, full pit stops, and probably a restart while I was typing that.)

Or are you watching the Brickyard 400 Presented by Golden Corral? Yes, that’s pretty much what ESPN is calling it – poor John Wayne Walding, the decorated Army veteran, isn’t getting much attention on television.

As you can see from the photo, just five years ago this was the nice, simple Allstate 400 at the Brickyard. What happened?

Or they don’t. Sandwiched between the Federated Auto Parts 400 and the Sylvania 300 is the “NASCAR Sprint Cup Series September Chicagoland Race,” meaning they haven’t sold sponsorship for the race yet. Likely they will – as with any piece of real estate, the price will likely drop as crunch time approaches. The race is September 14 – on September 15, that sponsorship will be worthless.

Selling and buying race sponsorship is a black art. Pocono hosted the Pocono 400 in June, and will present the GoBowling.com 400 in August. Earlier this month the track had IndyCar’s Pocono IndyCar 500 Fueled by Sunoco.

That suggests less than a full sponsorship, and Pocono 400 suggests no sponsorship at all, so it’s probably a safe bet that GoBowling.com got a good deal. Pocono has always been a tough sell, especially since the privately-owned track doesn’t have the collective marketing clout of the NASCAR-affiliated International Speedway Corporation, or Bruton Smith’s Speedway Motorsports.

And what kind of money are we talking about? That’s all over the board, depending on the series, the date, the location, the track. Lower-tier series might be able to get just five figures for a race sponsorship, while the big boys get seven figures. The Holy Grail has always been the Indianapolis 500 – that, the Daytona 500 and the 24 Hours of Le Mans remain among the few races still untainted by company affiliation in the name. Traditionalists hope that never changes. Accountants might feel differently.

Of course, as you would expect, Formula One is the toughest to deal with. Before the first F1 race at the Circuit of the Americas in Texas, Bernie Ecclestone and his crew made a couple of demands the track never expected.

First, the track had some big red, white and blue stars painted into the design of some of the paved runoff areas. Those had to go – literally overnight – because Ecclestone thought the stars sort of advertised the Lone Star State, and since Texas didn’t write him a check, the stars disappeared. And second, and just as bizarre, the DeJoria family – including Paul DeJoria, the shampoo magnate and a minor investor in the facility, and his daughter, Alexis, the drag racer – had a modest sign placed on the tunnel entrance welcoming fans to the track. It said “from the DeJoria family,” not from any of the products they represent.

NASCAR and the Indianapolis Motor Speedway know that calling a race The Crown Royal Presents the John Wayne Walding 400 at the Brickyard Powered by BigMachineRecords.com is absurd, and it isn’t something they take all that seriously – if NASCAR and track officials stalked through the media center insisting that every reference to the race be TCRPTJWW400ATBPBBMR.com, they’d be laughed out the door. I hope.

Presumably, and similarly, they would like ESPN to call the race by its "proper" name, but apparently Golden Corral wrote ESPN a check, and Crown Royal didn't.

Just something to think about during a long race. A long, long race.