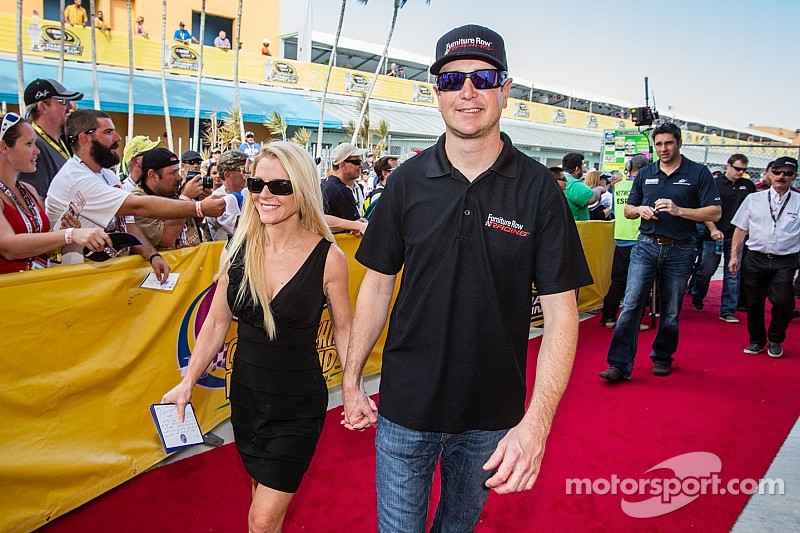 So who is Patricia Driscoll, the woman who filed a complaint against former boyfriend, NASCAR driver Kurt Busch?

She is now 36, and lives in Maryland, though she was born in Texas. Se has a son named Houston who is 8. According to her Wikipedia biography, which also says she is a descendant of Benjamin Franklin, Driscoll is “Chief Executive Officer of Frontline Defense Systems LLC (FDS), a company that provides solutions relating to advanced technologies and surveillance systems for the intelligence community and the Department of Defense.

“Driscoll consults on security related issues to the United States government and international corporations. She has testified before Congress as an expert in various fields including trade relations, border issues, and surveillance systems. On October 21, 2003, Driscoll testified before the House Subcommittee on Rural Enterprise, Agriculture, and Technology to discuss difficulties small businesses have in regards to contracting with the Department of Homeland Security.”

She is also president of the Armed Forces Foundation, “an organization devoted to providing financial assistance, morale activities, career and educational opportunities to wounded service men and women and their families.”

Grandfather was a spy

In an interview with Skirtsnandscuffs.com, Driscoll said that her father was “employed with U.S. Customs, Aviation and she found it to be intriguing because of the missions and fighting illegal drug activities.
“Additionally, her maternal grandfather was a spy and Army Air Corps aviator who fought battles in conflicts from World War II through Vietnam. “He did all kinds of missions throughout the world and disappeared a lot. He was a really neat guy, always fascinating stories and I think that growing up as a kid it was something that very much interested me so I started my defense company which has provided a lot of solutions to the government on different aspects that I can't talk about.”

That story quoted Driscoll as saying she met Busch at the Walter Reed army hospital. “Patricia says she met the love of her life, Kurt Busch, at Walter Reed. ‘The funny thing is we met at Walter Reed and that obviously to me is always a good sign. You didn't meet him at a bar. Your mom always says that you should meet someone at church, right? That is about as close to church as you are going to get. It was funny because I remember walking up to the back of him because someone told me that I was going to be seated at the same table because we were going to be doing some tours as a group.’”

She addressed the fact that Busch has had some problems with the media, and with his image. “Yes, I do feel there are some things that he does which are wrong but so does everybody else here but he is an easy target to pick on. I feel like he is guy that has been cut open, left out in the water and the sharks just keep circling around and people just like to dog pile. I hate it because I see what such a wonderful person he is, his commitment to the troops as well as doing charity work and to us as a family is very significant.”

Driscoll began sitting atop Busch’s war wagon with his crew chief in 2011, often accompanied by wounded warriors who shared the space. She typically looked overdressed and uncomfortable in a dress and high heels, but eventually seemed at ease with the role at the track, and began to look and play the part of a driver’s girlfriend.

On KurtBusch.com, the driver still has this posted in his biography: “Racing is not all that makes this elite driver special, his passion for our wounded service members and Veterans is unparalleled in the garage. With his partner in life and President of the Armed Forces Foundation, Patricia Driscoll, the team has raised and given out over $75 million dollars to wounded service members and their families. Busch and Driscoll have been a force to be reckoned with on Capitol Hill and the Department of Defense, advocating for veteran care. Their work has been nationally recognized by Congress and senior Military leadership.

“Each year over 100 members of Congress, members of the Presidential Administration, and General Officers from all branches of service attend their annual Congressional gala honoring America's wounded troops. This power couple appears on National network TV on almost a monthly basis educating America on the issues of Post Traumatic Stress Disorder (PTSD) and Traumatic Brain Injury (TBI). Driscoll and Busch, in conjunction with the Armed Forces Foundation, have co-authored a children's book on dealing with injury, are in post-production on their PTSD documentary, and finishing up filming military educational videos on PTSD. Busch was selected by the Veteran's Administration to be their representative and spokesperson on the E-Benefits campaign and will appear in all of their upcoming campaign materials. Busch and Driscoll will also film their 4th annual Ron White's Salute to the Troops comedy special airing on Country Music Television (CMT), which has been the highest rated program on the network three years in a row.”

The Armed Forces Foundation issued a statement Friday that Busch was no longer part of the organization’s efforts.

Another uphill battle for Edwards