KANNAPOLIS, N.C. (March 13, 2013) – If you’re Irish and celebrating St. Patrick’s Day, you may head to Boston, Chicago or New York City or, perhaps, listen to the music of The Wolfe Tones and Paddy Reilly.

If you’re Irish and involved in NASCAR, you’ll head to the Irish hotbed of Bristol, Tenn., for Sunday’s Food City 500 NASCAR Sprint Cup Series race at Bristol Motor Speedway. And rather than the sound of Irish music, you’ll hear pretty much nothing as it’s pretty darn loud at Bristol when 43 stock cars roar to life.

But in the spirit of the occasion, Danica Patrick’s No. 10 GoDaddy.com Chevrolet SS for Stewart-Haas Racing (SHR) will sport a special St. Patrick’s Day paint scheme. The look of the car will be unveiled Thursday on GoDaddy’s Twitter feed (@GoDaddy).

Patrick will make her second Sprint Cup start at Bristol and hopes to build on her successful run last August at the .533-mile high-banked, concrete oval when she surprised some veteran NASCAR observers by running a solid race for much of the night. After starting 43rd due to qualifying being rained out, Patrick calmly moved her way through the field and was in the top-20 and on the lead lap with 66 laps remaining when her car was hit by another and contacted the SAFER Barrier on the inside retaining wall of the frontstretch. She finished a disappointing 29th.

Her solid run in her Bristol debut in the Sprint Cup Series, came one night after a ninth-place finish in the NASCAR Nationwide Series race.

The Food City 500 will also mark the first short-track race that she and crew chief Tony Gibson will work together. They’ve worked two races at the 1-mile Phoenix International Raceway, but have never competed together at a short-track such as Bristol. In addition, it will be their first race together at a concrete racetrack.

It’s not the traditional Irish celebration, but a good run at Bristol will have Irish eyes smiling on the GoDaddy.com team. 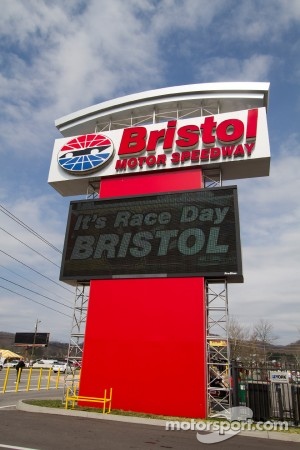 DANICA PATRICK, Driver of the No. 10 GoDaddy.com Chevrolet SS for Stewart-Haas Racing:

What are your thoughts heading into Bristol?

“I’ve liked Bristol since the first time. For me, I respond to the banking, which translates to grip, and it’s definitely there. We were having a decent run in the Cup car, we were lead lap and top-20 after 440 laps and, unfortunately, were taken out. But, I think that all those events lead us to more potential the next time around with a better baseline setup. I feel like, for us and for me, my strong suit is the race, or, at least at this point. We just need to work on qualifying and get a decent qualifying spot so we can work from there. I feel like it’s not very common to drop back for me so, if we can just start further up, then we can continue to make progress and be smart.”

You struggled with an ill-handling car last week at Las Vegas. Does that concern you as you look toward the upcoming races at Fontana and Texas?

“Vegas is a little bit different, but the only thing that worries me is that Vegas is a little bit more of a high-grip track. So, when the grip level goes down, when I felt like I didn’t have much grip to begin with, that concerns me a little bit. We’re only one mile-and-a-half race into the year with the new Gen-6 car, so there’s no reason to panic, yet. But it is time to really buckle down and figure out how we’re going to make the GoDaddy.com Chevrolet better for the next mile-and-a-half.”

How do you stay calm when you have a tough day like you did a Las Vegas?

“Tony Gibson (crew chief) does a great job of telling me to stay calm and take what the car will give me. I feel bad sitting in the car and not being able to go further forward. He feels bad because he can’t give me the car that I need to go further forward. So, we’re both feeling for each other. He’s a good cheerleader and I appreciate that. It makes a big difference on days like Sunday when you’re down. We are all a little somber and disappointed, but nobody is throwing around words or screaming. And that helps us for this weekend.”

Kyle Busch ready for action in the Bristol half-mile bullring

Gilliland's Bristol Record a Reason to Root for A&W Car