Stenhouse Jr. to Fill in for Bayne; Make Sprint Cup Debut in Coca-Coca 600
Kenseth to drive No. 16 Fastenal Mustang in Nationwide Race

CONCORD, N.C. – Ricky Stenhouse Jr., will fill in for Trevor Bayne in the No. 21 Motorcraft/Quick Lane Ford in this Sunday’s Coca-Cola 600 at Charlotte Motor Speedway. The race will mark the Sprint Cup debut for the 2010 Nationwide Series rookie of the year, who won his first Nationwide Series race last weekend at Iowa Speedway.

“Obviously its not the circumstances that you want to make your first Sprint Cup start,” said Stenhouse. “But you grow up dreaming about this moment and I am excited and grateful for the opportunity; to not only make my first start, but to be able to drive the No. 21 Ford of the Wood Brothers in one of the biggest races of the season.

...we are happy he accepted the offer to step in before Trevor comes back for our next race.

“Trevor is a very good friend of mine and he’s going to be around this weekend and I know that his help with the transition will be instrumental. Hopefully we can give him an effort that will make him proud before we turn the car back over to him for the rest of the season.”

“We can’t wait to have Trevor back with us, but we can’t think of a better driver to fill in than Ricky,” said Wood Brothers co-owner Eddie Wood. “Ricky has been doing an outstanding job in the Nationwide Series. Like Trevor, he is definitely one of the up and coming drivers in our sport and we are happy that he accepted the offer to step in before Trevor comes back for our next race.” 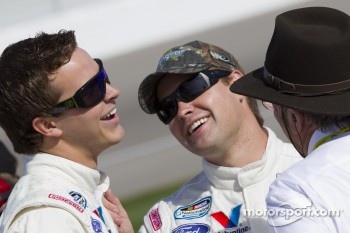 “Charlotte has always been a good track for both me and Roush Fenway in the Nationwide Series,” said Kenseth. “I’m excited to be a part of the three-car Fastenal fleet that we’ll have out there on Saturday and hopefully one of us will end up back in victory lane.”

Bayne will make his return to NASCAR next weekend in the Nationwide Series at Chicagoland. He will make his next Sprint Cup start in the No. 21 Motorcraft/Quick Lane Ford two weeks later at Michigan.