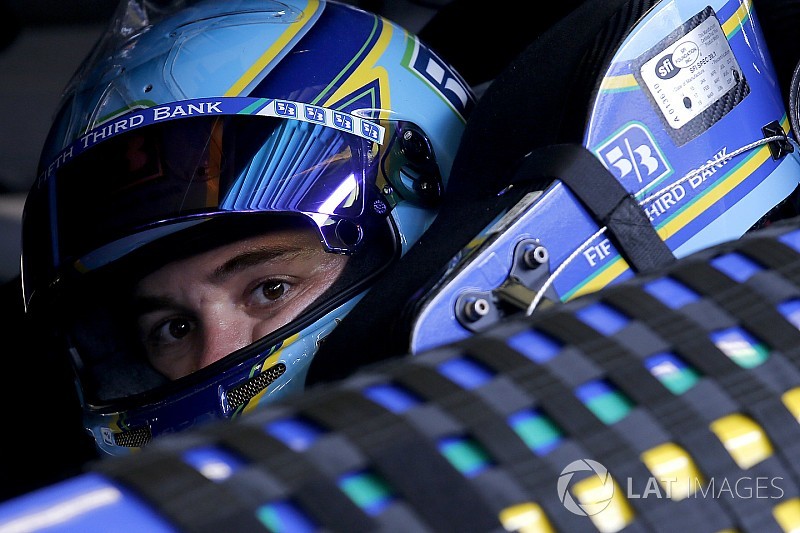 During the break between Stages 1 and 2, Brad Keselowski was the first off pit road after making a two-tire pit stop.

Kyle Busch overshot his pit stall during the stops and Kevin Harvick had a prolonged pit stall to repair the hoses in the car. Once Harvick got back on the track, he also reported a “massive vibration” and had to pit a second time.

Paul Menard crashed off Turn 2 after being hit by Johnson to bring out the first caution of the race for an on-track incident.

When the race returned to green on Lap 53, Keselowski continued to lead followed by Byron, Stenhouse, Kurt Busch and Newman.

Byron powered into the lead just before the start on lap 54 with Keselowski falling back into the second position.

In Turn 3 on Lap 54, Stenhouse hit Keselowski from behind which triggered a massive wreck that collected all four Stewart-Haas Racing cars, three of four Hendrick cars and all three Team Penske entries among several others.

In all, 20 of the 40 cars entered in the race received some sort of damage from the incident.

Said Keselowski: “Ricky was pushing me, he didn’t do anything wrong. My fault ... we’re not wrecking enough people, people are throwing too many bad blocks.”

The race returned to green on Lap 63 with Byron leading the way followed by Stenhouse, Newman, Kyle Busch and J.J. Yeley.

Coming on Turn 4 on the next lap, Stenhouse ran into Kyle Busch, who hit race leader Byron to trigger yet another multi-car incident.

“Disappointing to get crashed out by the same guy that caused the first crash,” Busch said. “You always come to Daytona waiting to crash and try to figure out when and where and hope that you can walk away from it.”

When the race returned to green with 10 laps remaining in the stage, Stenhouse was back in the lead followed by Newman, Chris Buescher, Johnson and McDowell.

Newman and Stenhouse swapped the lead over the next two laps as McDowell moved up to third.

With four laps left in the stage, McDowell moved up to second as Bowman moved into third as Stenhouse led the way.

Over half the field taken out in consecutive wrecks at Daytona