After two misses in just as many weeks, Sterling Marlin took his ...

After two misses in just as many weeks, Sterling Marlin took his #40 Coors Dodge to Victory Lane in the UAW-DaimlerChrysler 400 at Las Vegas Motor Speedway. The Chip Ganassi Racing driver hung on despite early problems and a late race caution to pull out the win.

"The last caution, I thought 'no not again'," said Marlin. "We weren't that good yesterday evening. The guys talked it over this morning, and made some changes. I couldn't believe it, We drove it pretty flawlessly." 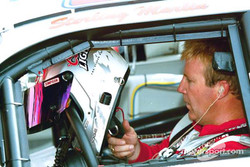 "This is big," said Lee McCall. " We worked together very well this weekend, we made quite a few changes on the car. To bring a new car here and win shows how great a team this is."

In only his third race in a Dodge, Jeremy Mayfield brought his Evernham Motorsports car home in second place.

Mark Martin claimed third place in his #6 Roush Racing Ford Taurus in a run that shows there its still a lot of racing left in him.

Early on it seemed that the young guns of Ryan Newman and Kurt Busch were the ones to beat, with Newman leading for 50 laps. Busch was in the hunt throughout the day as well, but ended up 20th when his engine went south near the race end. Newman ended the race in the 4th position, and moves up to second in the points standings behind Marlin.

Tony Stewart was another tough contender throughout the day and he had one million extra reasons to want the win. But Stewart's hunt for the 'No Bull Five' bonus fell short with a fifth place run.

Marlin seemed to catch a break in Vegas after NASCAR's red flag decisions from the previous two weeks left him bitter. He was caught speeding down pit road after being hit on track and spun sliding into pit lane. NASCAR officials were unable to get to Marlin's pit in time to enforce the expected penalty. NASCAR rules say that the penalty must be accessed at the time of the incident, if it is not then it cannot be enforced later.

The final caution of the day occurred when Jerry Nadeau's Hendrick Motorsports Monte Carlo pushed Robby Gordon's Richard Childress Racing Monte Carlo into the Dodge of Kyle Petty. Petty spun on the main straight but did not hit anything. When the green flew again, Marlin pulled away from the field and was never challenged again.

Only two cars were not running at the end. Bobby Hamilton, Jr.'s Monte Carlo found the wall early in the event. Shawna Robinson's Dodge hit the wall twice before she retired.