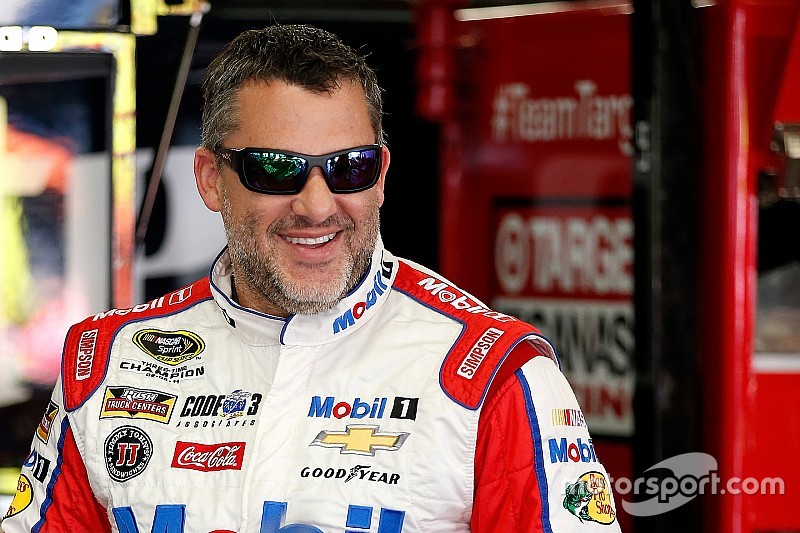 Tony Stewart tried his hand at iRacing Thursday night at Pocono and hopefully, it's no indication of how the rest of his weekend will go.

It was fun "right up to the point where you wreck," laughed Stewart. The two-time Pocono winner was a novice on the critically acclaimed racing simulator and spun out several times while in the midst of battle.

"I didn't realize this was the best of the best in the world that run ovals with iRacing, so I don't feel too bad about it. You feel like you're getting your butt kicked out there. These guys are good at what they do.

"You think it's going to be carnage out there, guys running into each other, but these guys are really good at not doing that."

Giving credit where credit is due

Now back to reality, where Tony is currently enjoying a streak of strong finishes on his way to his final Chase. Even his 11th at Indianapolis was admirable, having fought back from a lap down after running near the front for most of the race.

"It's been fun to see fans of ours and how much better they feel. We're running better and it makes them feel better as well," said Stewart.

He continues to attribute a lot of his newfound success to rookie crew chief Mike Bugarewicz.

"When Zippy (Greg Zipadelli) was my crew chief, it was the practical knowledge and the experience working on race cars. I don't think that pays off now as much as it used to. Now, you've got to have an engineering background to understand what makes these cars do what they do. The stuff they do now is way above my head and the head of guys with practical knowledge. It's the guys that have the technical knowledge that can understand these things.

"Adam Stevens was a driver in the past and then an engineer for us, same as Dave Rogers. They worked their way up so when they come to the Cup side as crew chiefs, they already knew what to do. Buga went from being an engineer to a crew chief overnight. He didn't get that luxury of going down to the Xfinity Series and getting his feet wet.

"He pretty much got thrown to the wolves right off the bat and he's done a great job."

No regrets over lug nut comments

One of Stewart-Haas Racing's teams come to Pocono without their usual crew chief -- Rodney Childers. The voice in Kevin Harvick's ear has been forced to sit out this weekend due to violating NASCAR's stringent lug nut policy at Indianapolis. It's not the first time a SHR team has been hit with this kind of penalty with Kurt Busch losing crew chief Tony Gibson for a week earlier this year. And it was actually Stewart's harsh criticism that pushed NASCAR to re-evaluate their policy of self-regulation.

Kurt did go on to win without Gibson, so these suspensions may not hurt as much as one may think.

"Oh, he'll (Childers) be here," Stewart grinned, alluding to the many forms of communication at their disposal.

"He just won't be here. He'll virtually be here."

NASCAR suspensions do not directly forbid crew chiefs to speak with their team over the weekend through Skype, FaceTime or other digital means.

"Do I regret (saying that)? Absolutely not," added the always outspoken driver.

Stewart is a man with a lot of things on his plate as a driver, team owner and track owner. But that's just the way he likes it.

"Best thing I can do is keep myself busy. When I do that, it seems to work better for me. I went to the Kings Royal, got back at 3:30 in the morning and then ran 2nd. It's not the sleep I need, it's the clear mind I need. I can stay up like a rockstar still ... Not sure the rest of these kids can."

Will Gordon run the Glen? "We'll cross that bridge when we get there"