Tony Stewart: like an old pair of tennis shoes

After missing the final 15 races of the 2013 NASCAR Sprint Cup Series season with a broken right leg, Tony Stewart climbed back in his No. 14 Bass Pro Shops/Mobil 1 Chevrolet SS last week at Daytona (Fla.) International Speedway without missing a beat.

He drove in three races – the Sprint Unlimited, Budweiser Duel and Daytona 500 – and each time he sat behind the wheel, Stewart likened the comfort of his seat to an old pair of tennis shoes.

With Daytona behind Stewart and Phoenix International Raceway next up for the three-time Sprint Cup champion, Stewart ratchets up his comfort level. 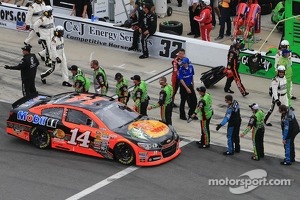 The Stewart-Haas Racing driver and owner has been racing and winning at Phoenix since 1993. In the Sprint Cup Series alone, Stewart has scored a win, eight top-fives, 12 top-10s and has led a total of 555 laps in 23 career starts – all while being a model of consistency, completing all but 14 of an available 7,257 laps for a completion rate of 99.8 percent. And that’s only a small portion of Stewart’s resume at the 1-mile oval.

In addition to Sprint Cup cars, Stewart has made laps at Phoenix in NASCAR Nationwide Series cars, Indy cars, Supermodifieds and USAC Midget and Silver Crown cars. There isn’t another driver on the circuit who has logged more laps at Phoenix in as many different cars.

Those first laps for Stewart came at the famed Copper World Classic in the 1993 season-opener for USAC’s Silver Crown division. Stewart qualified second to Davey Hamilton – a former IndyCar veteran – and led 31 of the 50 laps before finishing second to Mike Bliss – the 2003 NASCAR Camping World Truck Series champion. The $3,500 payday for his second-place effort made eight-hour days at $5 an hour in the cold confines of the machine shop where Stewart worked in Columbus, Ind., seem unnecessary. Packing the rest of the 1993 season with Silver Crown, Sprint and Midget races across the nation, Stewart’s quick ascent up the racing ladder began.

Twenty-one years later, that ascent continues for Stewart as he comes back to Phoenix ready to resume his winning ways.

After all the time you spent in a car at Daytona, how do you feel going into the second race of the season at Phoenix?

“A lot more confident than I was before we got to Daytona. I think having all the races that we ran, and actually getting in a crash, while not a great thing, allowed me to sort of test my leg and it felt good.

“As far as being in the racecar, there have been some little things that have felt a little different, but for the most part, it’s felt like an old pair of tennis shoes that you’re just comfortable with. I think the whole time in Daytona exceeded my expectations of what I hoped it would be like.”

Daytona went well in regard to you being comfortable in the racecar. Considering the seriousness of your injury and the rehabilitation you’ve undergone since, are you tougher than you thought?

“I think I’m pretty tough, honestly. Every injury is different for everybody. No two people have exactly the same injuries, and I’ve never had anything like this happen, so I don’t have anything to compare it to. The confidence you get from it is from your surgeon and from your therapist, and they’re saying, ‘Wow, we can’t believe how good this looks or how good you’re feeling or how good a progress you’re making.’ I’ve got guys that shoot me straight. They’re not just saying these things to motivate me. They’re just saying we didn’t expect you to be able to do this at this time. Being able to have those personal gains and victories keeps us pretty motivated.”

“I keep asking the therapist the same thing. The surgeon and the therapist have said that they feel like we’re going to have 100 percent recovery. They don’t see anything in the progress that leads them to believe otherwise. But, there are no guarantees. If this is all the better it gets right now, I’m not disappointed. I’m able to do most of the stuff that I want to do. I’m not going to be running 100‑yard dashes anytime soon, but the progress has been really good, and at the rate we’re progressing, it’s almost like we’re really taking big leaps each session now. I think the hard part is over, and we’ve still got to work hard, but we’ve gotten through the hardest part now.”

Daytona was a tough outing for you and your Stewart-Haas Racing teammates in terms of results. Is too much emphasis placed on Daytona in terms of how teams are going to perform for the rest of the season?

“Daytona is a restrictor-plate race and, unlike Daytona, guys can’t get in a line at Phoenix and go to the front. Daytona and Talladega (Ala.) have always just been two different forms of racing. With the draft being so important at those two tracks, it’s more of a team deal than an individual deal. What happens at Phoenix and the races after that has to be done on your own. You can’t help each other at Phoenix. You just have to go race.”

How long have you been racing at Phoenix?

“I started racing there in ’93 when I ran a USAC Silver Crown car. And since then, I’ve run USAC Midgets, Indy cars, Supermodifieds, Nationwide Series cars and, of course, Sprint Cup. So, I’ve logged a bunch of laps there. To think that it all kind of started at Phoenix, I guess you could say it’s the place where my career came full-circle.”

Did you take an immediate liking to Phoenix in 1993 when you ran there in USAC?

“When we ran the USAC cars out there, it was pretty cool because I had never gone that fast before. It’s just one of those tracks where, to run a Midget and a Silver Crown car there, it definitely got your attention. It was pretty fast.”

How did you transition from one type of racing to another?

“It’s more fear than anything that I’m going to have to get a real job if I’m not successful. That’s the great thing about running USAC and being in Indiana, where not only did we have winged Sprint cars and non-winged Sprint cars, Midgets, Silver Crown cars, we ran on dirt tracks one night and pavement the next. We ran Modifieds and Late Models. There were just so many things to drive around there that you learned how to adapt, and you learned how not to have a preconceived notion about how a racecar is supposed to feel and drive. You learned to read what the car was telling you as far as what it liked and disliked, and learned how to change your driving style accordingly. Especially at Phoenix, every car we’ve driven there, even though the track’s the same, they all drove differently. You just had to adapt to it and learn to read the racecar instead of thinking this is what the car I ran last night felt like and it’s supposed to feel like this today. It doesn’t work that way.”

Phoenix: A springboard to a Harvick title?