TONY STEWART
What a Difference a Year Makes

KANNAPOLIS, N.C., (Aug. 15, 2012) – Last August when the NASCAR Sprint Cup Series rolled into Michigan International Speedway in Brooklyn, Tony Stewart was blunt in assessing his team’s performance. “We’re not setting the world on fire,” said Stewart before the race weekend even began. Then, after a ninth-place finish in the Pure Michigan 400, Stewart famously declared, “If we’re going to run this bad, it really doesn’t matter whether we make the Chase or not because we’re going to be occupying a spot in the Chase that somebody else that can actually run for a championship should take because our stuff is so bad right now, we’re wasting one of those top-12 spots.” 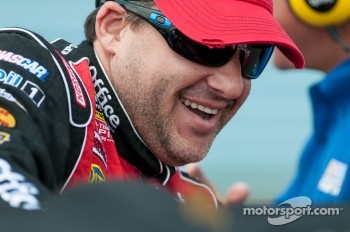 Stewart, of course, made the Chase, and in doing so, set the world on fire behind the wheel of his No. 14 Mobil 1/Office Depot Chevrolet. In record fashion, he won five of the season’s last 10 races en route to securing his third Sprint Cup championship in an epic finale where Stewart won the title over Carl Edwards by virtue of a tiebreaker, as Stewart’s fives wins trumped Edwards’ one.

The glow of the 2011 championship hasn’t waned in 2012, as Stewart has won three races and shares the No. 1 Chase seed with fellow three-time race winners Jimmie Johnson and Brad Keselowski. Augmenting those wins are eight top-threes, nine top-fives and 11 top-10s which currently place Stewart eighth in points.

Compare this season to last year at this time, when Stewart had zero wins and only two top-fives and eight top-10s, leaving him in the precarious position of 10th in points – the bubble spot to earn a guaranteed spot in the 12-driver Chase. Had Stewart fallen out of the top-10, he would’ve missed the Chase, for the 11th- and 12th-place spots are wild cards, reserved for the two drivers between 11th and 20th in points who have the most wins. Keselowski (three wins) and Hamlin (one win) earned those spots in 2011. A winless Stewart wouldn’t have been eligible.

When Stewart wasn’t biting his fingernails, he was using them to hold on to his top-10 point standing. He was successful, thanks to a third-place run in the second-to-last regular season race at Atlanta Motor Speedway and a seventh-place finish in the cutoff race at Richmond (Va.) International Raceway.

Stewart was in the Chase for the seventh time of his career, and with the Chase allowing him to hit a reset button on his season, he pulled off one of the biggest comebacks in sports history by winning the 2011 championship.

Eight months removed from hoisting the Sprint Cup trophy last November at Homestead-Miami Speedway, Stewart has remained in championship form, as his most recent run at Michigan attests.

When the series visited the 2-mile oval back in June, Stewart started eighth on the freshly paved track, led 18 laps and finished second. It was the second race of a nine-race run where Stewart finished among the top-12 seven times, four of which were top-three finishes, including a win July 7 at Daytona (Fla.) International Speedway. It was also Stewart’s eighth top-three finish at Michigan, a statistic which includes a victory in June 2000, where Stewart secured the second-longest advance to victory in a Sprint Cup race at Michigan after starting 28th.

That rallying spirit, which was evidenced in the Chase, has often been on display at Michigan. Stewart holds the record for greatest improvement from a starting position at Michigan, as the three-time and reigning Sprint Cup champion started 41st in the June 2007 race and advanced 38 positions to finish third, besting the previous mark of 36 places earned by Jimmy Spencer (40th to fourth) in the June 1996 race.

With a much better outlook in 2012 than he had in 2011, Stewart will look to add to those numbers come Sunday in the Pure Michigan 400.

TONY STEWART, Driver of the No. 14 Mobil 1/Office Depot Chevrolet for Stewart-Haas Racing:

When you raced at Michigan back in June, it was your first time on the new pavement. How was it and what do you expect in your return visit?

“Once it cleaned off, it seemed like the track got to be pretty good. It was still a relatively one-groove track, but it got better as the weekend went on. Hopefully, the racetrack will continue on that path and continue to widen out. It was a lot racier than I thought it would be, right off the bat, so I’m anticipating it’s going to be even better when we get back on it this weekend.”

With the new pavement, the speeds at Michigan are very high – in the 200 mph range. Is that of any concern to you?

“I don’t think so. The safety of these cars has come a long way, and racetrack safety, too, with the soft walls. I don’t think you’re ever really concerned about it until something bad happens. But I’ve been to racetracks, and I’ve seen crashes at 60 mph that hurt people a lot worse than 160 mph. So I feel pretty confident with the safety package that we have, with both the racetrack side and with what NASCAR has done with the cars.”

You’ve had a solid stretch of results these last nine races where your average finish is 9.5. But during this time, you’ve also had to do a lot of rallying, as your average starting spot is 21.2. How are you able to overcome these starting spots and get your car to where you want it to be at the end of the race?

How do you feel your season is going so far?

“We’re still trying to find some consistency. We’ve had some great runs and then some not-so-great runs. Lately though, we’ve been running pretty competitively. Even at Kentucky (finished 32nd) and last week at Watkins Glen (finished 19th), we were fast. We never really got to show it at Kentucky because we had ignition trouble. We were 30-some odd laps down but running some of the fastest laps of the race. And at Watkins Glen, we had a top-five car but I made a mistake and spun and we ended up 19th. We can be better, but I also know we’re getting better, too.”

You’re eighth in points with three wins and only four races remain before the Chase begins. You’re pretty secure among the top-10 in points with a 63-point buffer over 11th-place Kasey Kahne, and your three wins all but guarantees you a Chase berth even if you were to fall out of the top-10. Do you feel secure?

“Well, you feel better knowing you have three wins. But the thing is, you don’t really think from that standpoint. You always go in there every weekend with the intention that you’re going to win the race. So you’re focusing on what you’ve got to do to keep your program good so when you get in the Chase, you can perform in the Chase. But, for right now, it’s just kind of the same thing we always talk about every year at this time. We’re taking it one week at a time, and you’re just trying to make sure that every track you’re going to, you’re getting 100 percent out of what your package is that weekend.”

Jeff Gordon to become vice chairman at Hendrick Motorsports in 2022

Debate: No. 2 team behind Hendrick Motorsports