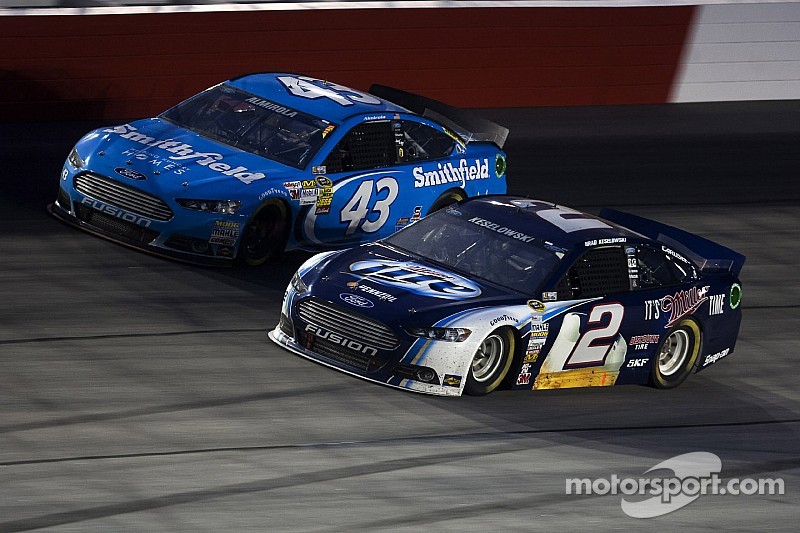 The last time Ford won four consecutive Cup events was 2001 with Dale Jarrett and Robert Yates Racing posting three of the four victories and Elliott Sadler the other for the Wood Brothers.

The last time Ford won four consecutive Cup events was 2001 with Dale Jarrett and Robert Yates Racing posting three of the four victories and Elliott Sadler the other for the Wood Brothers.

“I do feel like one of us can win the championship,” said Penske’s Joey Logano of Ford’s 2014 chances.

Keselowski, who qualified seventh for Sunday’s race, easily had the fastest laps in both of Saturday’s practice sessions. Keselowski turned the fastest lap of the day in the morning session (133.745 mph) and was the only driver to top 133 mph in final practice (133.254).

That said, New Hampshire continues to present both a challenge and a checkpoint. No Ford driver has won on the Magic Mile since Greg Biffle in 2008.  Logano was the top Ford qualifier for Sunday’s race, checking in with the sixth-fastest lap on Friday.

Logano, Edwards and Keselowski are all but locked into the Chase for the NASCAR Sprint Cup field with two victories apiece this season. Almirola’s victory last week at Daytona nearly assures his place. That doesn’t mean that every Ford team will take the same approach as it applies to preparation for the Chase or choosing tracks at which to test.

While teammates Biffle (15th in points) and Ricky Stenhouse Jr. (28th) need a win to start thinking about the Chase, Edwards views Sunday’s race at New Hampshire (one of 10 tracks in the Chase lineup) as a chance to experiment.

“For us, this is really a race where we can try some things for the second race of the Chase because it is going to be so important to try to make it through that first round,” Edwards said.

Team Penske and Richard Petty Motorsports are already taking very different approaches when it comes to testing.  Penske has yet to use any of its allotted four test sessions this season.

“We are stockpiling them because we are both in,” Logano said. “We are going to go to the tracks where we feel we need to test the most. It definitely gives us an edge. Are we where we want to be? No. We want to keep getting better and will work with Ford with that.  We want to make sure that come Chase time our weak points are as strong as our good points.”

RPM plans to use its third of four tests to prepare for the Aug. 10 road course race at Watkins Glen International. The team knows that its best chance of putting a second car in the Chase is to have Marcos Ambrose win at Watkins Glen.

“For as small an underdog team as we are, to have the possibility of getting both our cars in the Chase is phenomenal,” Almirola said. “We want to give Marcos the best shot to win there. That is the priority on our list right now.”

One thing could change RPM’s plans to test at Watkins Glen: a win by Ambrose either this week at New Hampshire or next week at Indianapolis. A victory at New Hampshire would be a true upset for Ambrose, who in 10 Cup races at NHMS has finished no better than ninth.

“I would love for (Ambrose) to win here this weekend,” Almirola said. “Then we don’t have to test Watkins Glen because we know he will be good there anyway.”