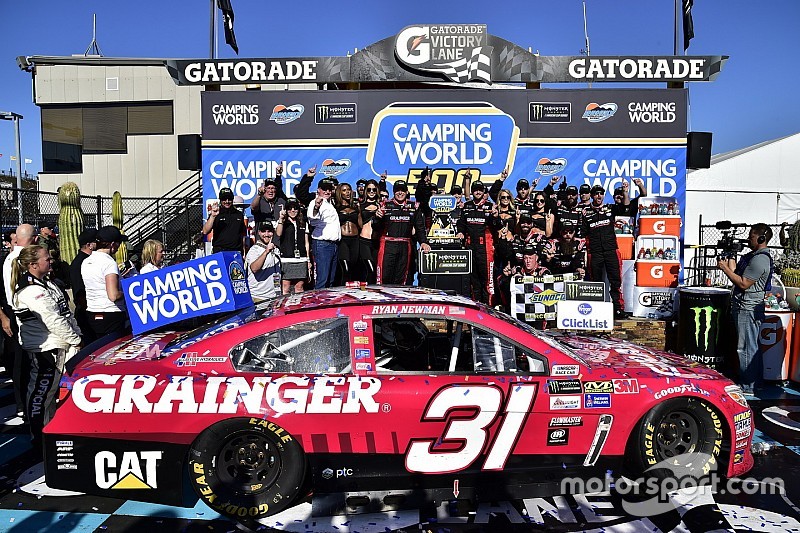 Like any old racer, Richard Childress desperately wants to remain relevant in the sport.

That’s difficult when the company that shares your name isn’t winning — and hasn’t for 112 races.

But on Sunday at Phoenix Raceway, Ryan Newman and Luke Lambert showed why it’s not time to give up on the 45-year-old company just yet.

“It's been a long, hard fight, and a battle all the way,” Childress said. “Nobody ever gave up. We never gave up in Ryan. We know that he can do it. Our cars just haven't been quite where we needed to…Thank the press for sticking with us here, all of you.”

Similar to Roush Fenway Racing and Ford, Childress has watched his star-power diminish over the last decade as his A-list drivers have left for greener pastures. Certainly the loss of Dale Earnhardt in 2001 had an irreparable effect on RCR. The departures of Clint Bowyer and particularly Kevin Harvick, compounded the problem. Childress was at a low ebb of talent that could produce multiple wins in a season.

For nearly two decades, RCR has been overshadowed by Hendrick Motorsports in the Chevy camp. The addition of Stewart-Haas Racing to the Bowtie Brigade in 2009 knocked RCR farther down the pecking order. SHR’s move to Ford opened the door for Childress and Chip Ganassi Racing to receive additional technical support from the manufacturer. However, the bump in the budget included a caveat — RCR’s performance had to improve as well. Three-plus years without a victory wasn’t going to cut it.

Ganassi Racing came out strong with Kyle Larson, 24, being one of two drivers (Brad Keselowski being the other) to earn points in the first two stages of the first four races — and finish second in the last three. On Sunday, Chase Elliott, 21, became the first Chevy driver to win a stage since NASCAR introduced the new format for 2017.

It's given us the opportunity now to have that type of confidence will allow us to try some new things, go into Fontana next week with the opportunity to be a little more aggressive

Still, it was Newman who delivered Chevy it’s first trophy of the season. And it’s been Newman who has picked up points in either the first or second stage in the first four races. Yes, Paul Menard scored RCR’s first top-five of 2017 at Daytona. But Menard has yet to finish in the top 10 in Stages 1 or Stage 2.

Austin Dillon, Childress’ grandson and the future of RCR, has just one top-10 stage result — sixth in the second stage at Atlanta Motor Speedway. He posted his best finish of the season on Sunday — 18th.

Lambert is relieved that Newman and the team have finally turned the corner. It’s the first time RCR has placed the No. 31 car in Victory Lane since the fall 2008 at Charlotte Motor Speedway with Jeff Burton.

“I certainly had hoped that we would be to Victory Lane before now,” said Lambert, who earned his first victory as a Cup crew chief on Sunday in his 157th race. “I feel like our race team has surpassed a lot of expectations, but we have also not delivered as rapidly as far as getting to the winner's circle as I would like for us to.

“I just want to say how hard everybody has worked at our company for a number of years to get us here, and how proud that makes me. I can't say enough about Richard and his confidence, his drive. One of our slogans this year at RCR has been: It takes drive. I think us getting here today is an example of that drive and that steadfast, stubborn passion for racing and building better race cars that has taken years to get us back here.”

With his team competing against as many as 39 opponents each week, Lambert says it’s difficult to accept the one-winner concept compared with stick-and-ball sports. He describes NASCAR racing “as a championship every single Sunday.” For that reason, Lambert says it’s hard for a team to recover from a slump and even more difficult to sustain momentum when it does.

“You can take a company able to build a 15th‑place car to a 7th‑place car, and it still doesn't feel like a victory. Recognizing those incremental gains is one of the names of the game in this sport. Helping everybody inside the organization to see, we are tracking in the right direction.
We can't expect to hit a home run out of nowhere, but we need to expect to see results, pay attention to those results, accurately measure them, keep everybody's motivation level where it needs to be.”

What it means to win now

Lambert insists the RCR cars are getting better. And while the momentum won’t develop overnight, the luxury of having an automatic Playoff berth will allow the No. 31 team to experiment and try different strategies that will benefit them for the final 10 races.

“It puts us in a position to be a little bit more aggressive,” Lambert said. “We haven't been in this position as a race team the last couple years. I felt like we've had really, really strong cars and a team at given points in the season, and just haven't been able to play as aggressively, play as loose as some of the other teams can, as far as trying new components, trying aggressive setups, doing things we haven't done in the past to see if they'll live and survive the test of a race.

“It's given us the opportunity now to have that type of confidence will allow us to try some new things, go into Fontana next week with the opportunity to be a little more aggressive and, you know, race with that level of confidence. It means a lot. Ultimately, I don't know that it will change everything that we do, but I'm sure it will give us an opportunity to do some things we couldn't do in the past.”