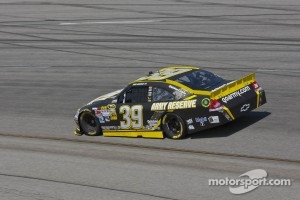 Ryan Newman’s woes at the superspeedways on the NASCAR Sprint Cup Series circuit continued as an engine failure just 40 laps into the Aaron’s 499 ended his day Sunday at the Talladega (Ala.) Superspeedway. It was yet another in a string of frustrating outings at the 2.66-mile track for Newman, who placed 36th in the No. 39 Bass Pro Shops/Tracker Boats Chevrolet.

“I smelled oil off of (Turn) 2 and felt the motor tightening up, and I lost oil pressure and gained a bunch of water pressure,” Newman said. “I just pulled it out of gear. I knew it was blowing up, but just seeing if we had a chance to fix it and hoping we could. But I’m pretty sure it’s hurt.

“I’ve got to thank Johnny Morris and everybody from Bass Pro Shops for jumping on board for this race.”

Newman, who ran in the top-five early before dropping to the back of the pack, was just riding around and biding his time at Talladega when he reported to his crew that his motor was “blowing up” at lap 40.

Bass Pro Shops/Tracker Boats driver Newman told crew chief Tony Gibson the water temperature was rising, oil pressure was lost, and water was spewing from the car. Gibson told Newman to bring his Chevrolet to the garage so the crew could diagnose the problem and see if there was a chance that Newman could get back on track.

But the problem was determined terminal after members of the Stewart-Haas Racing crew and the Hendrick Motorsports engine shop inspected under the hood. Newman’s day was over after just 42 laps.

Kyle Busch finished .304 of a second behind Keselowski in the runner-up spot, while Matt Kenseth, Kasey Kahne and Greg Biffle rounded out the top-five. Clint Bowyer, David Ragan, Trevor Bayne, Dale Earnhardt Jr. and Jeff Burton comprised the remainder of the top-10.

There were five caution periods for 24 laps, with 19 drivers failing to finish the 194-lap race, which was extended six laps by a green-white-checkered finish.

With round 10 of 36 complete, Tony Stewart leads the SHR contingent in the championship point standings. He is seventh with 328 points, 50 behind series leader Biffle. Newman is 13th with 286 points, 92 out of first.

Bayne scores a top 10 at Talladega