Team Gibbs a model of success at Atlanta

When the NASCAR Nextel Cup Series garage opened on Thursday afternoon at Atlanta Motor Speedway, all eyes were clearly focused on one team -- Joe Gibbs Racing. The duo of Bobby Labonte and Tony Stewart has dominated at the 1.54 mile speedway with ...

When the NASCAR Nextel Cup Series garage opened on Thursday afternoon at Atlanta Motor Speedway, all eyes were clearly focused on one team -- Joe Gibbs Racing.

The duo of Bobby Labonte and Tony Stewart has dominated at the 1.54 mile speedway with seven wins in the past eight years. Labonte leads the way with six wins while Stewart has racked up four straight top-5 finishes. 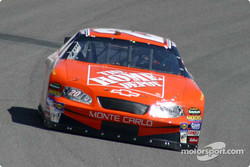 "Our teams run really good here," Stewart said after picking up another top-5 Atlanta finish and watching Labonte win the race last March. "It's a track we both like, and it's a great place for the fans to watch a mile-and-a-half track."

Stewart struggled early in his career at Atlanta, managing just one top-10 finish in his first six races while Labonte, who has 12 top-5 finishes and two poles in 22 races at Atlanta, took a liking to the track immediately.

"I was like 17-years-old when I ran my first race here in a 'Baby Grand' car and I finished third, and I think what helped was that the throttle got hung wide open," reflected Labonte, who is in his 10th season with Joe Gibbs Racing. "That was my first time here and I can't explain why I ran good then because we didn't do nothing but wax the car. I love going fast here. The faster you go the more I like it."

With steep 24 degree banking in all four corners, drivers can stay on the throttle most of the way around the track. The wide racing surface encourages multiple racing lines that allow drivers the opportunity to pass virtually anywhere on the track.

"It's probably the best one we run on all year," Stewart concedes. "You can run on the bottom, you can run on the top, you can run anywhere in between. You actually get to race here. It's kind of nice on a mile-and-a-half to be able to race instead of one of these new places you can't race on."

The drivers consider AMS the fastest track on the circuit. Ryan Newman's pole speed of 194.295 miles per hour was the quickest recorded lap at any track last season. Geoffrey Bodine's record qualifying run of 197.478 mph in 1997 was the fastest lap on any track other than Daytona or Talladega.

"It's fast, but it's not scary fast," Stewart acknowledged. "You run really quick here, but the track is really wide. If you make a bobble, you don't have to hold your breath. I ran a 237 mph average at Indianapolis during rookie orientation for the (1996) Indy 500, so going fast doesn't bother me in the least bit." 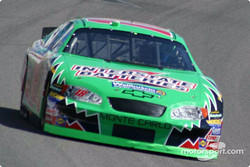 Bobby Labonte.
Photo by Michael C. Johnson.
The new tire compound and reduced spoiler that NASCAR implemented this season to enhance competition is expected to have a pronounced effect on the cars this weekend. They carry a lot of speed in the corners at Atlanta and as the track gathers rubber during the weekend, teams may struggle to find the grip they need to keep their momentum through the corners.

"I don't think it's going to make us all revert back to zero and start over, but the new rules package is the same for everybody and that does keep things even," Stewart says. "But you're still going to have to make adjustments to find what the car likes and dislikes, and that's no different than any other time we've had a new construction or compound of tire to deal with."

Bruton Smith purchased the speedway in 1990 and immediately went to work putting his stamp on the facility. He erected a nine-story complex that included 46 condominiums overlooking what was then Turn 2 and added luxury suites and additional grandstands to increase the seating capacity to 124,000. In 1997, the start-finish line was moved to the opposite side of the track and a pair of doglegs were added to the new front stretch.

Labonte, who won the last event on the old oval format, finished fourth in his first race on the new configuration before posting back-to-back wins in the next two races. He has seven top-5 finishes at Atlanta since then, including second and fifth place finishes in 2000 when he won the series championship.

"(Atlanta's) just something I've grown accustomed to and I like it a lot," Labonte explains. "I have no secrets about it. Nothing that, when we go down there, tells me we're going to be competitive. I do get a good feel for going through the race. It's a flat-out, fast, fast racetrack, and I do like those types of racetracks. That one there just maybe suits our style a little bit better."