Texas race in April will have new title sponsor: The NRA

Texas Motor Speedway and the National Rifle Association have signed a one-year agreement with a renewal option for America’s oldest civil rights and sportsmen’s group to serve as the title sponsor for the NASCAR Sprint Cup Series race on April 13, 2013. The announcement was made at the annual TMS Media Day on Monday, March 4th on the 9th floor of the Speedway Club overlooking the infield of the 1.5-mile superspeedway located in Fort Worth, Texas. 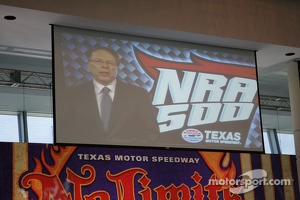 NRA Executive Vice President and CEO Wayne LaPierre was unable to attend the Media Day announcement, but did provide a video message for those in attendance and those watching by teleconference.

“The NRA 500 is the latest announcement in the long history of a growing partnership between the NRA, Speedway Motorsports and the NASCAR community,” LaPierre stated. “NRA members and NASCAR fans love their country and everything that is good and right about America. We salute our flag, volunteer in our churches and communities, cherish our families and we love racing! On April 13, we’ll all come together at Texas Motor Speedway.”

Once the portion of the Media Day at Texas Motor Speedway was over, Eddie Gossage, TMS Speedway President was immediately surrounded by reporters who wanted to know about the timing of the announcement with the Congressional gun control debate in the forefront and the school shooting in Newtown, Connecticut still being featured prominently in the national news media. 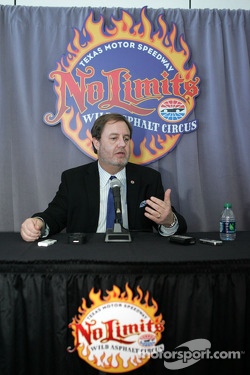 “This isn’t a political platform. This is a sports marking opportunity. They (NRA) obviously saw a very attractive sports marketing opportunity and seized it. It is about putting on one of the great sporting events in America.”

“I know that in Atlanta last year they saluted a lot of the folks that make America free,” said Gossage. The NRA’s most recent race entitlement in the sport came last season when the organization was the title sponsor for the NASCAR Nationwide Series at the Atlanta Motor Speedway.

The Nationwide Series race last season was known as the “NRA American Warrior 300” and was held September 1st at the Atlanta speedway which is owned by the same parent company of Texas Motor Speedway, Speedway Motorsports, Inc. a publicly traded company that is a leading marketer and promoter of motorsports entertainment in the United States.

The NRA has had a relationship with the NASCAR industry for more than a decade on a variety of platforms. The organization continues to be a generous supporter of SMI’s Speedway Children’s Charities and its fund-raising events since 2000. The NRA has contributed more than $500,000 to the Texas Chapter of SCC at Texas Motor Speedway.

“They are going to salute American freedom and families at this race. It seemed to be a good fit, and a good fit demographically,” Gossage added.

The NRA will host it’ national convention in Houston, Texas, a short three and a half hour drive from Fort Worth just three weeks after the race. NASCAR owner Richard Childress, a current NRA board member.

Gossage noted that other companies had looked at taking the vacant sponsorship when Samsung Mobile, which had served as the title sponsor of the spring race since 2002, did not renew its contract.

“We had other offers but a lot of people wait and expect you to drop your price. That’s not something we do. We are not going to be a discount speedway. They (NRA) were willing to meet the price and they afford us some great marking opportunities as well with their membership and we will try and bring their members to the race,” said Gossage.

Gossage said that the NRA had expressed interest in obtaining the sponsorship rights to the spring race last fall but that the discussions did not start until after the first of the year. The final contract on the sponsorship was just signed last week.

Known for the winners donning Cowboy hats and shooting off six-shooters in Victory Lane after a Sprint Cup Victory, the pole winner at Texas Motor Speedway also receives a custom made shotgun.

“I think it fits,” said Gossage. “I know it fits the NRA. They are quite happy to be a part of the race. We put on a big sporting event and any sponsor you talk to has see it has to be a demographic fit for them. It is going to work out well.”

Gossage also noted that since the announcement had been made he was monitoring social media and that 99% of the reaction to the sponsorship was positive. “Some of it wildly supportive,” he added.

“The public doesn’t seem to have any issues with it and I’m not sure why anybody would think they would. Know your demographics. We pride ourselves on being good at what we are doing on who we are partnering with.”

“I suspect we will sell a lot of tickets to their members and folks that support their position on American rights and freedoms in the 2nd Amendment. Again, we wouldn’t enter into a partnership that doesn’t fit us demographically. We are both reaching a similar audience.”

Typically Texas Motor Speedway has a contract for sponsorship structured in three-year deals. The NRA wanted to do a one-year deal with options for more years if the organization decides to continue to sponsor the spring race.

“We’ll see how it goes and if it works for everyone,” said Gossage. “You don’t want a partner that doesn’t fit. When it’s all said and done, you want them to be excited to sign on the bottom line. Hopefully they will be pleased and we can sit down and talk about the options. We are going to put on a big race and they are going to be a part of it.”

“We have reduced the price on 15,000 tickets a couple of weeks ago, we have instituted children’s ticket prices for the first time in our history. We have a new rain out policy that could be incredibly expensive to us but we made it as an investment to our fans. It’s not like anything in sports,” noted Gossage.

“So to do that you have to have other revenue streams and this title sponsorship allows us to be healthy in that area.”

Texas Motor Speedway has a crowd capacity in excess of 190,000 and is among the largest sports stadiums in America. Known as “The Great American Speedway!,” the tract host two races in the NASCAR Sprint Cup Series, Nationwide Series and Camping World Truck Series as well as one in the IZOD IndyCar Series.

Martin Truex Jr. hopes to change his luck this weekend on Vegas 400

Denny Hamlin strikes back at NASCAR