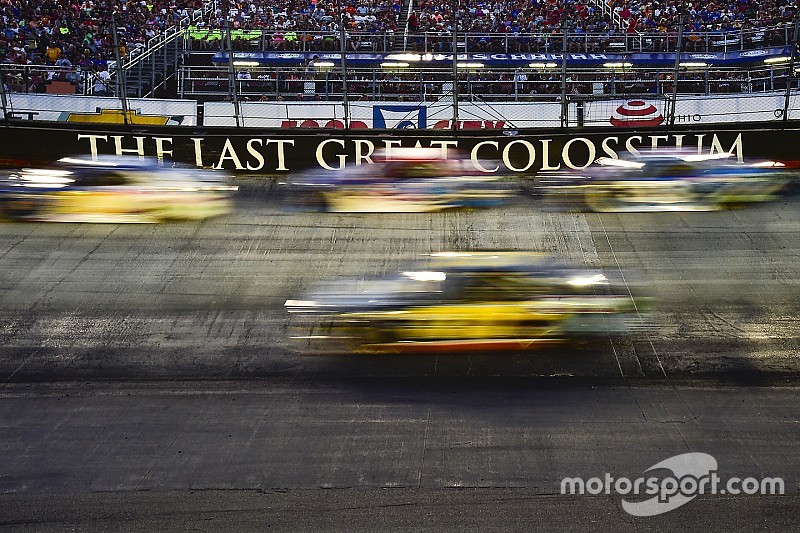 Forty years ago this month, the track billed as both the Last Great Colosseum and the World’s Fastest Half-Mile held its first race under the lights.

As the years passed, the annual Night Race at Bristol Motor Speedway became one of the must-see races on the NASCAR schedule. Sellouts quickly became the norm and seating capacity quickly expanded to keep up with the growing demand.

It had become more than just a race, more than just another stop among a series of races that stretched from February through November. The night race became a happening.

It was equal parts atmosphere and action. Always volatile and always memorable.

“The Bristol night race,” said driver Chase Elliott, “is one of the coolest races on the schedule.

The track has hosted two Cup events per year since opening in 1961. The spring event has almost always fallen between late March and early April.

Initially, the second event was held on Sunday afternoons in late July. Unfortunately, the weather in Northeast Tennessee during that time of year often was and still is unbearably hot.

That didn’t exactly endear the race weekend to drivers and teams. Nor did it pull in large numbers at the gate.

According to Cale Yarborough, winner of that first night race and nine BMS races overall, previous July crowds at BMS were so thin “there were hardly enough people in the grandstands to start a fight.”

Racing under the lights wasn’t the first move attempted. In 1975 it was held in November; for 1976 and ’77 the race moved back to July but the distance was trimmed to 400 laps. Nothing seemed to make any difference.

And then track ownership decided to put the show under lights and move it back to Saturday night.

Track co-owner Lanny Hester said “It couldn’t have worked out much better.”

NASCAR President Bill France Jr. noted at the time that “the fans liked it. No one sat down the first half of the race.”

Racing under the lights

Putting the race under the lights to escape the oppressive heat helped, but the night race didn’t become one of the series’ most popular stops simply because it was run after the sun went down.

Through the years, there have been numerous races that featured not only close competition but plenty of contact.

Among the most memorable were two that took place in 1995 and ’99, both involving the same drivers – Terry Labonte and Dale Earnhardt. The Iceman and the Intimidator.

In ’95, Labonte won the Goody’s 500 in spite of contact from Earnhardt as the two sped toward the checkered flag. Labonte got the win, but it was a heavily damaged No. 5 Chevrolet that limped into victory lane. In the meantime, Earnhardt found himself dealing with an angry Rusty Wallace, still fuming from contact earlier in the race.

Four years later, Labonte and Earnhardt found themselves embroiled in another controversial finish. This time it was Earnhardt who took the checkered flag, but only after spinning Labonte out in Turn 2 on the final lap to take the lead.

“I wasn’t going to wreck him, but I got to him and turned him around,” Earnhardt said of the contact with Labonte. “Didn’t mean to really turn him around; meant to rattle his cage, though.”

Replied Labonte: “He never has any intention of taking anyone out.”

In 2002 it was Jeff Gordon moving Rusty Wallace out of the racing groove less than five laps from the finish to take the lead and score the win, ending a 31-race winless streak.

In ’08 race winner Carl Edwards used his bumper to get by Kyle Busch with 30 laps remaining, a move that led to contact between the two on the cool-down lap.

Edwards defended his move, saying it was no different than what Busch had done to him on a previous occasion.

A battle between Matt Kenseth and Tony Stewart in the 2012 night race ended with both cars damaged after contact sent them sliding down the frontstretch and into the wall. Kenseth drove off; Stewart wasn’t as fortunate. Moments later a miffed Stewart hurled his helmet at Kenseth’s car as it rolled off pit road.

“Really the races (that stand out) are those with Terry and Dale,” former Bristol winner Jeff Burton said. “Dale was in a lot of these … the one with Rusty throwing the water bottle (at Earnhardt).”

Today Burton is a NASCAR analyst for NBC Sports. Older brother Ward also made the Bristol Nigh Race highlight reel.

“One of the best all-time interviews was Ward after (Dale Earnhardt) Junior spun him or whatever it was that happened,” Jeff Burton said.

“When I first started with NBC, a lot of people here hadn’t been around racing. “So, your brother raced?”

“I show them that video. ‘That’s my brother. That guy right there.’”

After contact from Earnhardt Jr. put Ward Burton on the sidelines, Burton angrily tossed his heat shields at the driver of the No. 8 Chevrolet.

“I got some really good words for him but I can’t say it on TV. I’ve just got to control myself right at the moment. … I wish I had something I could have shot through the window.”

There have been major changes to the .533-mile track through the years. In 1969, the banking in the turns was increased; in 1992 the asphalt surface was replaced with concrete; and in 2012, the upper groove of the racing surface was ground in an effort to create tighter racing quarters.

Nothing, however, has dampened the desire of drivers to win at Bristol, particularly when it comes to the night race.

“The night race is one that I’ve always circled as being one that I want to win a lot,” Kyle Larson, driver of the No. 42 Chevrolet for Chip Ganassi Racing, said. “Any race at Bristol really, but there’s something about the night race. It seems to have a little more prestige and atmosphere around it.”

The race has always been “a big deal,” according to Burton.

“Hell yeah, the prestige of winning at Bristol … the pre-race atmosphere at this race track is something that, when I look back at my career, to be able to stand in the infield at Bristol Motor Speedway, national anthem, people parachuting into the track, freaking grandstands rocking, I know this sounds stupid but that’s something that I miss,” he said.

“When I think about the things I miss, one of the things is this. This experience and this environment and the energy that comes from it. I just feel lucky to have experienced that energy.”