The Bubble Boys in the Chase for the Sprint Cup 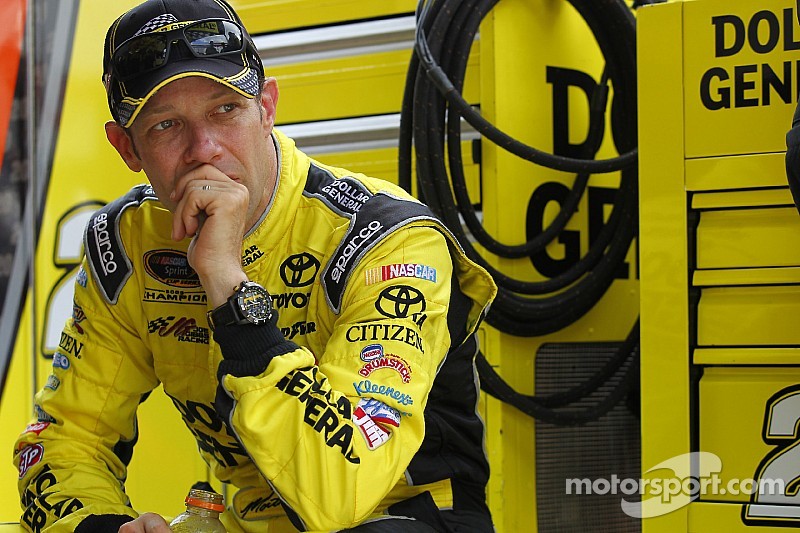 With three races remaining to determine the Chase grid will any of the four drivers in the top 16 without wins breakthrough on Saturday night?

But last week at Michigan Speedway, Kenseth was at the wrong place at the wrong time when Danica Patrick went into the spin cycle.

MIS has traditionally been one of Kenseth’s better tracks, but when he was collected in the multi-car wreck on Lap 25, the best result the driver of the No. 20 Toyota could produce was 38th.

With just three races to decide the Chase for the Sprint Cup grid, drivers on the bubble would rather be on a roll than taking a tumble.

His advantage in the Outlook standings is currently 30 points over Ryan Newman (14th), followed by Clint Bowyer and Greg Biffle. Only nine points separate Biffle, who is in, from Kasey Kahne, who is out of the top 16.

Still, Kenseth doesn’t “feel like a lock”. With the unpredictable nature of Bristol Motor Speedway, where Kenseth knows “anything can happen”, he’s far from comfortable with his current position.

“Until it's mathematically impossible to be out, I never feel like you're in,” Kenseth said. “We want to win.  We've been doing the best we can do every week.  Obviously with the season we had last year I didn't think we'd be sitting here at the end of August without a win for sure.  But we're doing everything we can do.  We're doing the best we can.

“It's been an interesting year.  We started off I felt like really solid and then I feel like our performance has got steadily better but we've just been caught up in a lot of stuff.  Some of it I guess is your own doing and if you were running better you wouldn't be caught up in it.  You can always look at that.  Speedway wrecks -- last week the 10 car spun out there in front of us and we got caught up in that wreck.  Just been caught in a lot of stuff that's really cost us a lot of good finishes.”

Still, since Fontana, the fifth race of the season, Kenseth has not been out side of the top five in the standings. Fortunately for Kenseth, the drivers with wins behind him in the point standings – Kevin Harvick and Jimmie Johnson – have had their own issues. But his average finish of 13.8 doesn’t tell the whole story.

“Even though they're not all DNF's on the stat sheet, there's a lot of races that we weren't running competitively at the end because we've been in accidents,” Kenseth added. “ So, to still be where we are in the points I guess is a good thing with all of the trouble that we've had but certainly we want to go win but you can only do the best you can.  You can't force them.  You go out and race as hard as you can every week and try to get the best result you can and hopefully you'll get some wins."

So if they can keep their noses – and tails – clean, which of the Bubble Boys have the best shot a Bristol?

2) Ryan Newman – Newman’s luck hasn’t been the best at Bristol. Although he’s starts 11th, and only Jeff Gordon and Joey Logano have better average qualifying efforts, Newman’s average finish is 17th with just one top five in 25 starts. He finished in the top 10 in 13 races.

3) Clint Bowyer – Bowyer has never won at Bristol. He has five top fives and eight top 10s in 17 starts. The No. 15 Toyota has a better shot of winning at Richmond where he has two wins and an average finish of 12th. Bowyer rolls off 14th.

4) Greg Biffle – Of the four drivers in the Chase Outlook, Biffle’s eighth-place starting position tops his competitors on the grid. So does his average finish of 12th at Thunder Valley. But Biffle has failed to find Victory Lane in 23 attempts at Bristol. He has six top fives and 12 top 10s.

5) Kasey Kahne – Kahne has wins at the three final tracks before the Chase. His Bristol win was last year in the spring race when he led 109 laps. Kahne finished second in this race last year and eight in March. He rolls off 12th.

6) Austin Dillon – Dillon is the most consistent candidate in the rookie class. He has just one Cup start at Bristol but finished 11th in the spring. He starts 26th.

7) Kyle Larson – This freshman finished 10th in his Bristol debut and topped the speed chart in first practice. However, a rookie mistake in qualifying forced the team to spend the time working to repair the No 42 Chevy. He’ll start 40th and have to fight his way through the field.

8) Marcos Ambrose – Ambrose is 16th in the point standings and 20th in the Chase Outlook, trailing Biffle by 44 points. But Bristol is a rhythm track and if Ambrose can get in a groove, he could possibly pull off his first oval win. He has three top fives and six top 10 in 11 starts at Bristol.

If Jeff Gordon leads a lap in Saturday’s Irwin Tools Night Race he will tie Dale Earnhardt and Darrell Waltrip for running at the point the most races (30) at Bristol. Gordon starts second. He needs 723 circuits to pass D.W. for fourth on the all-time laps led at Bristol list.

Austin Dillon may be a rookie but he’s completed 6,109 circuits more laps in 2014 than any other driver on the Sprint Cup circuit. His completion rate through the first 23 races is 99.8 percent.

Kwasniewski to drive TSM's No. 42 car in standalone Nationwide races