The comeback continues for Kyle Busch with New Hampshire win 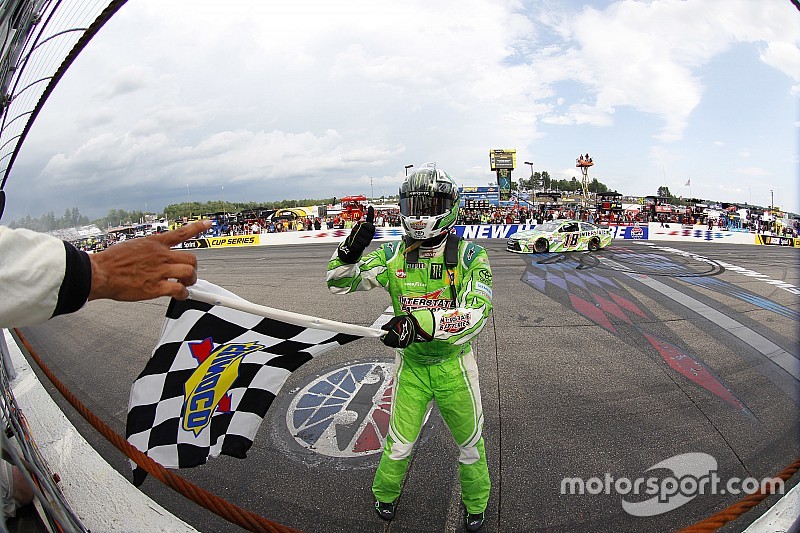 Busch earns his 32nd career Cup victory and moves within 58 points of 30th-place in the Sprint Cup standings.

Kyle Busch is making it look easy — and Sunday’s win at New Hampshire Motor Speedway is no exception.

After missing the first 12 races of the season, Busch's third win in his last four starts has enabled him to move from 39th to 33rd in the point standings and edge even closer to erasing the 58 points separating him from the top 30 requirement necessary to make the Chase.

The No. 18 Joe Gibbs Racing Toyota was fast in the early stages of the race. Busch came from starting fourth in the 5-hour Energy 301 to take the lead from his teammate and polesitter Carl Edwards on Lap 20 and held the point for the 47 laps.

Busch settled in among the top five midway through the race. But when he thought a tire was going down on Lap 244, the team elected to pit despite green-flag conditions. Busch went one lap down but refused to give up. As he caught the leaders on Lap 251, Busch went high down the frontstretch, nudged Brad Keselowski out of the way and cleared Kevin Harvick to return to the lead lap just as NASCAR called a caution for fluid on the track.

“Man, we are in the catbird's seat,” crew chief Adam Stevens told his driver.

And he was. Having pit six laps earlier, Busch could stay out on the track and assume the lead as the competition was forced to pit.

Despite being flanked by Keselowski — and his teammates Matt Kenseth and Carl Edwards behind — Busch was able to maintain the lead and held the point to the finish.

“Awesome job this stretch, man this has been cool,” Busch said. “Let’s keep it up. There’s no give up in this team.”

Keselowski, who led the most laps (100), was disappointed with his runner up finish and frustrated with lapped traffic blocking his progress on the race track.

“It wasn't in the cards,” Keselowski said. “We had a really fast car. I’m proud of the team for the effort, It feels good to have fast cars.

“Lap traffic was a bit of a struggle for everyone, just some more than others.”

After crashing out 52 laps into the Quicken Loans 400 at Michigan International Speedway, Busch was 173-points outside of the top 30. With 11 races remaining before the Chase, the challenge of winning and moving into the top 30 in the point standings seemed unlikely. But the No. 18 Joe Gibbs Racing team pulled together.

Sonoma Raceway was the next event on the schedule. Certainly, the first road course race of the season appeared to be the least likely place for Busch to win after coming back from a broken right leg and left foot. But the victory simply showed Busch's determination.

While a 17th-place finish at Daytona wasn't quite what the team had hoped for, wins last weekend at Kentucky and Sunday at New Hampshire have enabled the No. 18 team to gain 169 points since finishing last at Michigan four races ago.

And Busch shows no signs of slowing down.

"This is cool," Busch said. "I just can’t say enough about this group of guys behind me, everyone on this team and Adam Stevens and my pit crew. The group we’ve developed and the relationship we’ve had over the years with my pit crew from 2008. This is just an awesome feeling.

"I thank everyone at Joe Gibbs Racing for the work they’ve done and the effort that they’ve put in. We weren’t as good as we needed to be last year, but this year it seems to be that we are.

"We just have to keep doing our deal every weekend and it’s been getting better and better. It’s certainly the right thing to do is to win races and to gather those points, but to do it in the fashion we have been – just winning these things, that’s just spectacular and that’s awesome.”

Winning is the least of Toyota's worries