Patrick returns this weekend hoping to improve on her Darlington resume

KANNAPOLIS, N.C. (May 7, 2013) – It’s been called the toughest of all tracks on the NASCAR Sprint Cup Series schedule. So much so that Darlington (S.C.) Raceway years ago was nicknamed “The Track Too Tough To Tame.”

Darlington is an egg-shaped oval 1.366 miles in length – the odd shape because the western portion of the oval needed a tighter radius on the turns as founder Harold Brasington promised Sherman Ramsey, who owned a farm next to the property, that he wouldn’t disturb his minnow pond when he built the track in 1949.

The odd shape also means that, to find the fast way around the track, drivers run against the outside walls in each turn, sometimes brushing up against the wall and thus earning what has affectionately become known as a “Darlington Stripe” on the right side of the car. And the black marks left on the walls by the tires rubbing up against them all race weekend have led to the track’s other nickname – “The Lady in Black.”

For the third time in her NASCAR career and second in the NASCAR Sprint Cup Series, “The Lady in Green,” Danica Patrick, driver of the green No.10 GoDaddy.com Chevrolet SS for Stewart-Haas Racing (SHR), will meet “The Lady in Black,” when she competes in Saturday night’s Southern 500 Sprint Cup race at Darlington.

Patrick made her NASCAR debut at Darlington last year in the Nationwide Series by starting 15th and finishing and impressive 12th. One night later, she made just her second Sprint Cup start ever and finished 31st.

Her weekend impressed several NASCAR observers as Darlington is known as a track that is tough on first-timers. But “The Lady in Green” completed 513 of 519 laps in her first weekend at “The Lady in Black,” and did so without being in an accident – also a tough feat for a rookie, much less a seasoned veteran.

Patrick returns this weekend hoping to improve on her Darlington resume and perhaps tame the track that is “Too Tough To Tame.”

DANICA PATRICK, Driver of the No. 10 GoDaddy.com Chevrolet SS for Stewart-Haas Racing: 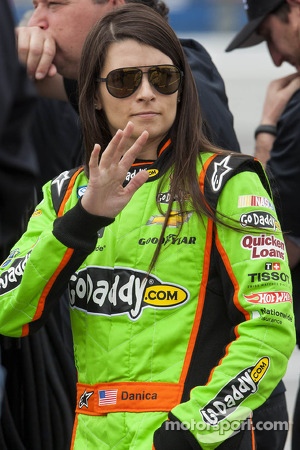 Are you more comfortable this year heading into Darlington than last year?


“Last year, I ran there in the (Sprint) Cup race and it was basically my first Cup race, really. I ran Daytona, but Darlington was like getting thrown into the deep end. That was the purpose of it, to get seat time so I’m not thinking or dreading going there this weekend worrying about what that’s going to look like for me and how it’s going to feel. I have an idea now of how it’s going to feel and what needs to be done.”

Talk about your experience at Darlington last year.

“I had never seen Darlington until that race weekend. So that’s always a bit interesting when you go somewhere you’ve never been. But I accomplished all the things I wanted to accomplish. Things went good on the Nationwide side. On the Cup side, my goals were to be respectable out there. I think I held my own. And the other one was to finish, and both of those things happened. So, overall, it was a good night. I definitely got a feel for all the elements. Starts, restarts and pitting, and all that stuff. Just how to get runs on cars. What to do when the car feels a certain way. Which lines to take, and to accommodate for the car and how it feels.”

TONY GIBSON, Crew chief of the No. 10 GoDaddy.com Chevrolet SS for Stewart-Haas Racing:

“Hopefully, she remembers what she learned last year. It’s hard because we only race at Darlington once a year, so it’s hard to remember that far back, sometimes. The biggest thing with Darlington is to race the racetrack, not anybody else. That’s what we did last time. She stayed out of trouble because she raced the racetrack, so that’s what she’s got to do again. I think that’s what impressed me there last time is she didn’t get caught up in trying to race everyone. She raced the racetrack and took what the car gave her. Our goal is to go there and have a clean race and finish. Typically, if you can do that, you can finish 25th or better and that’s what we’re going to try to do.”