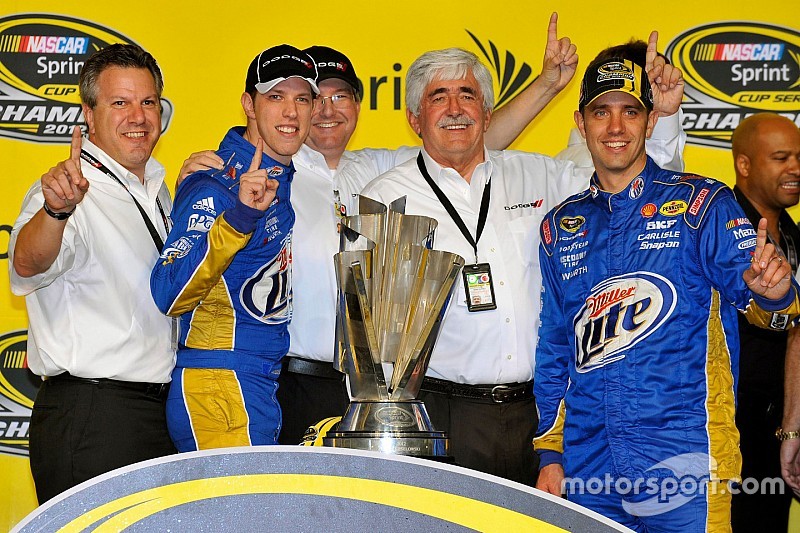 ...maybe nobody. Can the sport thrive with just three?

I think it was the first Phoenix race in 2013, when I noticed a little wire carousel in the press room with four baskets for press releases – Chevrolet, Ford, Toyota and Dodge. The one labeled “Dodge” was empty, appropriate since the company pulled out of NASCAR at the end of 2012, after its two-car Penske team won the championship with Brad Keselowski.

After having four for so many years, just three manufacturers in NASCAR didn’t seem right, and still doesn’t. It’s no secret that NASCAR would love to have a fourth manufacturer in the series: It looks bad when a company the size of Chrysler essentially tells the world that the payback from NASCAR is not worth the investment. Plus, NASCAR relies on the manufacturers to supply and fund a massive percentage of the advertising and promotion that keeps the sport going and, hopefully, growing.

So what are the chances of getting a fourth manufacturer back into NASCAR? Let’s take a look at the possibilities. And let’s start with the one that most recently left.

The decision to drop NASCAR did not come from inside Chrysler’s U.S. headquarters in Auburn Hills, Michigan – of that you can be assured. The loss of NASCAR, and then the loss of the factory-sponsored, title-winning Dodge Viper effort in the TUDOR United SportsCar Championship and the fledgling Dart showcase in Red Bull Global Rally Cross series, still stings the performance-minded employees there.

Except for some sponsorship, mostly within the NHRA, on behalf of Chrysler’s Mopar performance parts unit, the company is out of the racing business. Even the small amount spent last year on the Trans-Am series, supporting the Dodge Challenger, is gone.

No, that decision pretty much came at the top – Sergio Marchione, the sweater-wearing, 63-year-old CEO of Fiat Chrysler Automobiles, who engineered the rescue of Chrysler out of bankruptcy in 2009. And as the name of the organization should tell you, it is Fiat, and then Chrysler, Automobiles.

Indeed, Penske was prepared to negotiate to stay with Dodge for 2013 and beyond, but there was no negotiation, and of course Ford was right there to add the overachieving team to its roster. It should not be forgotten the extent to which Penske was punching above its weight in 2012 – a two-car team, and the only one running a Dodge? Not since Alan Kulwicki’s “Underbird” team title win in 1992 has such an underdog triumphed in NASCAR, if you can ever call Roger Penske an “underdog.”

That said, Dodge, led by SRT head Ralph Gilles, a massive motorsports fan and an above-average competition driver himself, kept up the fight to the end.

The central problem was that no one but Penske was building Dodge Sprint Cup engines, and no team willing to make the switch to Dodge had that capability. Still, Gilles engineered an ambitious deal with Michael Andretti, who had been wanting to go NASCAR racing, and was willing to do what it took to make it happen.

Andretti already had Kurt Busch lined up, and was planning a two-car Cup team, and a one- or two-car Xfinity team. Travis Pastrana’s name arose as a possible driver. Andretti found property in the Mooresville, N.C. area and was preparing to acquire it. He even hired public relations man Jade Gurss, author of the definitive books on Dale Earnhardt, Jr.’s career, to assemble a PR machine.

And then it all fell apart, and with Andretti, “It’s still a sore point,” he said. “I think we would have turned some heads,” he said in a recent interview with Motorsport.com at his Indianapolis headquarters. He is still interested in NASCAR, “but it would have to be the right opportunity.”

So is Dodge gone for good? Maybe not, but don’t expect them back into Cup racing in the near future, because that original problem still exists: Who will build their engines? They don’t want to do it in-house, and the current roster of NASCAR Cup engine builders you can pretty much count on one hand.

What Dodge needs to do is what the company did originally: Ease back into the Camping World Truck series, possibly with a solid two- or three-truck team like ThorSport. Of course, it would be badged as Ram, not Dodge, another questionable decision made in the Fiat offices.

They need to sell Ram trucks, the investment would be minimal, and the publicity over Chrysler’s return would be massive. And it would make them a NASCAR manufacturer, giving them license to participate in that marketing juggernaut again. Let Ram run with a NASCAR affiliation, and sales and brand recognition will increase.

“People don’t realize just how close Volkswagen came to getting into NASCAR,” said a VW executive, and he’s right. The latest version of the Passat, the executive said, had the right look for the Sprint Cup series, and Volkswagen had meetings with NASCAR Chairman Bran France, even presenting him, the VW executive said, with a list of requests.

The majority of those requests were approved almost on the spot, the VW executive said. But the plan got bogged down in the details, and at present no negotiations are ongoing that I’m aware of.

That could change: The aforementioned Michael Andretti and his Andretti Autosport is already the factory Volkswagen team for the Red Bull GRC, with drivers Scott Speed and Tanner Foust.

But does Andretti have time? Out of that Indianapolis shop, he is already fielding cars in the IndyCar, GRC, Pro Mazda, Indy Lights and Formula E series, not to mention the corner where cousin John Andretti works on his son Jarett’s USAC cars.

But Andretti obviously knows how to hire good people, delegate, and win. And he has some unfinished business with NASCAR.

There is, certainly, some circumstantial evidence: They have a new Titan truck that desperately needs to hit the ground running; they make V-8 engines; they have cars – the Maxima or Altima – that could be massaged to fit the Sprint Cup templates, and they have an active motorsports program, most notably the new and innovative Nissan GT-R LM Nismo that recently campaigned at the 24 Hours of Le Mans.

But Nissan, like Chrysler, is run by a European company, in this case Renault, which bailed Nissan out of a financial fix, and Renault Chairman and CEO Carlos Ghosn also became the Nissan CEO and Chairman.

Ghosn and Renault have never allowed the U.S. division of Nissan to spend more than pocket change on motorsports – even when Nissan became involved in the original DeltaWing project, it was Nissan of Europe that was running the show here in the U.S., where the car was developed. Plus, the Le Mans debut of the GT-R LM was an embarrassment, despite those pricey Super Bowl commercials.

Many in the U.S. think of Toyota, Nissan and Honda as essentially interchangeable Japanese companies, but Honda is far smaller than the other two. The company has its hands full funding its IndyCar engine program, and its so-far disastrous Formula 1 program, that expanding into NASCAR with the Accord is not an option for the company that has, incidentally, never had a V-8-powered vehicle in the U.S. All this also applied to Mazda, a smaller company struggling to fund its pair of IMSA Prototypes, but with much success in its grassroots efforts. If Mazda spends any more money, it will be to promote its all-new MX-5, better known as the Miata.

We’ll cover those two together, since they are controlled by the same company. Hyundai had a motorsports program as recently as last year with the Red Bull Global Rally Cross, and driver Rhys Millen won races. But the program ended for budgetary reasons.
Kia is active in the Pirelli World Challenge series, with the two-car, Atlanta-based Kinetic team driving, and occasionally winning, in Optimas.

There is no doubt Kia and Hyundai could afford to mount a full-scale NASCAR program, but it would take an investment that is so far out of scale of what the Koreans have allowed the Americans to do that it isn’t even conceivable.

Still, the Koreans are notoriously hard to predict, and there’s evidence that Hyundai will finally build a pickup truck, though it will likely be something similar to the Santa Cruz, a Honda Ridgeline-like unibody vehicle.

It is not outside the realm of possibility for the Koreans to enter NASCAR, and it’s known that some of its executives have toured NASCAR races. But having spoken at length to the U.S. company executives, I’m convinced they have heard nothing about a possible NASCAR venture.

So is NASCAR safe having just three right now?

Most likely. Ford will get through the implosion of signature team Roush, and eliminating NHRA spending has to have freed up some money, though some of that will go to the Ford GT racing program. Toyota is happy and rich.

The only near-term change we are likely to see is with Chevrolet. The brand presently races the SS, the Australian-built car of which they sold just 1,534 in the first six months of 2015 – that’s just 255 a month. The company has just introduced a new Malibu, a car that is in a serious battle with the Toyota Camry, Honda Accord, Ford Fusion, Nissan Altima, Mazda 6 and several other mainstream midsize cars, and dealers would benefit far more from publicizing the Malibu than the SS. Chevrolet sold 96,520 Malibus in the first half of 2015, but Toyota sold 215,816 Camrys, so the Malibu needs some help.

Still, it would be nice to have a fourth company filling that slot in the press release rack at the Phoenix press room. But it won’t be next year.

NASCAR will proceed with high-drag package at Michigan